Distribution of home village-to-hospital distances among children with severe malaria who were hospitalized and died (cases) or survived (controls).

Outcomes of hospitalization among children with severe malaria admitted to the pediatric ward showing periods of blood product stockouts. 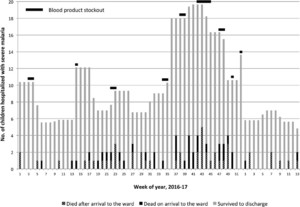 Malaria remains a public health crisis in areas where it has resisted control efforts. In Nchelenge District, a high-transmission area in northern Zambia, malaria accounts for more than one-third of pediatric hospitalizations and nearly one-half of hospital deaths in children. To identify risk factors for death due to malaria, we conducted a retrospective, time-matched case-control study of 126 children hospitalized with malaria who died (cases) and 126 children who survived (controls). There were no differences in age, gender, hemoglobin concentration, or prevalence of severe anemia between cases and controls. Children who died were more likely to come from villages located at greater distances from the hospital than children who survived (median 13.5 versus 3.2 km). Each additional kilometer of distance from the hospital increased the odds of death by 4% (odds ratio 1.04, 95% confidence interval 1.01–1.07, P < 0.01). Extent of anemia and admission during periods when blood was unavailable for transfusion were associated with early death (P ≤ 0.03). Delays in initiation of treatment of severe malaria contribute to the increased odds of death in children referred from more distant health centers, and might be mitigated by transportation improvements, capacity at rural health posts to administer treatment before transfer, hospital triage systems that minimize time to treatment, and reliable blood product stores at referral hospitals.