Analytical framework and themes for analysis developed from three bodies of literature. 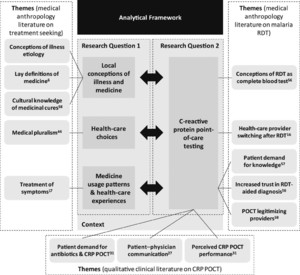 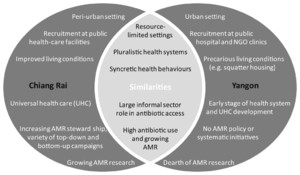 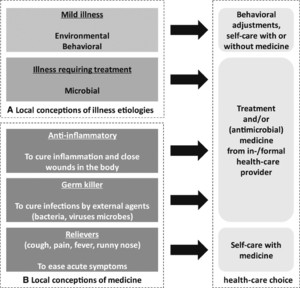 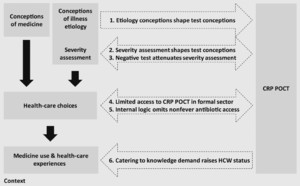 Antibiotic resistance is not solely a medical but also a social problem, influenced partly by patients’ treatment-seeking behavior and their conceptions of illness and medicines. Situated within the context of a clinical trial of C-reactive protein (CRP) biomarker testing to reduce antibiotic over-prescription at the primary care level, our study explores and compares the narratives of 58 fever patients in Chiang Rai (Thailand) and Yangon (Myanmar). Our objectives are to 1) compare local conceptions of illness and medicines in relation to health-care seeking and antibiotic demand; and to 2) understand how these conceptions could influence CRP point-of-care testing (POCT) at the primary care level in low- and middle-income country settings. We thereby go beyond the current knowledge about antimicrobial resistance and CRP POCT, which consists primarily of clinical research and quantitative data. We find that CRP POCT in Chiang Rai and Yangon interacted with fever patients’ preexisting conceptions of illness and medicines, their treatment-seeking behavior, and their health-care experiences, which has led to new interpretations of the test, potentially unforeseen exclusion patterns, implications for patients’ self-assessed illness severity, and an increase in the status of the formal health-care facilities that provide the test. Although we expected that local conceptions of illness diverge from inbuilt assumptions of clinical interventions, we conclude that this mismatch can undermine the intervention and potentially reproduce problematic equity patterns among CRP POCT users and nonusers. As a partial solution, implementers may consider applying the test after clinical examination to validate rather than direct prescription processes.