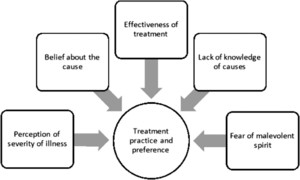 This study was conducted to explore the experiences of community members, particularly mothers, concerning their beliefs about the causes, treatment practices, and preferences for World Health Organization-defined neonatal danger signs in northwest Ethiopia. A phenomenological qualitative study was conducted in three districts of north Gondar Zone, Amhara region, Ethiopia, from March 10 to 28, 2016. Twelve focus group discussions were conducted involving 98 individuals. In-depth interviews were conducted with six health extension workers and 30 women who were either pregnant or who delivered in the past 6 months. Six subthemes emerged explaining the causes of neonatal danger signs. The causes varied from danger sign to danger sign and from person to person. Most of the perceived causes of danger signs in neonates do not align with the current biomedical science. Causal assumptions and perceived seriousness of danger signs influenced treatment practices and preferences. Four subthemes also emerged for treatment practices and preferences. In some cases, respondents indicated that non-biomedical sources of treatment were superior in outcome compared with biomedical treatment options. Unsatisfactory outcomes were mentioned as major reasons to opt for treatments from non-biomedical sources. Religious and cultural reasons were reported to be major impediments for treatment seeking for newborn danger signs. There is an urgent need to introduce or expand locally modified program interventions, such as community-based newborn care, to educate the community on the causes of neonatal danger signs and the need for prompt care seeking from qualified providers.