(A) People gather to collect drinking water from a charity tanker truck in the midst of the cholera epidemic in Taiz governorate, (B) rubbish piles up on a main street in Sana’a city, and (C) cholera-infected patients lie on the ground while receiving treatment at a temporary health station in Hajjah governorate, Yemen. This figure appears in color at www.ajtmh.org.

Geographic distribution of (A) suspected cholera cases and (B) associated deaths reported in Yemen from April 27, 2017 to January 14, 2018. This figure appears in color at www.ajtmh.org. 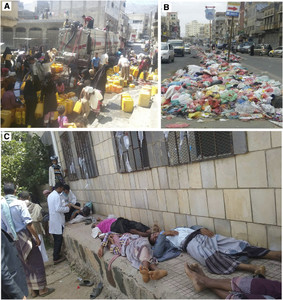 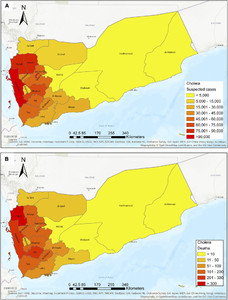 Yemen in a Time of Cholera: Current Situation and Challenges

Since early 2015, Yemen has been in the throes of a grueling civil war, which has devastated the health system and public services, and created one of the world’s worst humanitarian disasters. The country is currently facing a cholera epidemic the world’s largest on record, surpassing one million (1,061,548) suspected cases, with 2,373 related deaths since October 2016. Cases were first confirmed in Sana’a city and then spread to almost all governorates except Socotra Island. Continued efforts are being made by the World Health Organization and international partners to contain the epidemic through improving water, sanitation and hygiene, setting up diarrhea treatment centers, and improving the population’s awareness about the disease. The provision of clean water and adequate sanitation is imperative as an effective long-term solution to prevent the further spread of this epidemic. Cholera vaccination campaigns should also be conducted as a preventive measure.