Study sites for the small- and large-scale iron study.

Variation of the median well water iron concentration across unions. 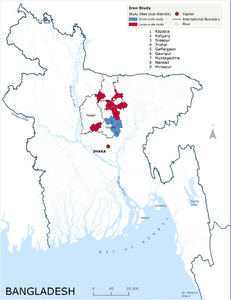 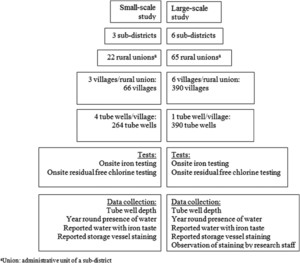 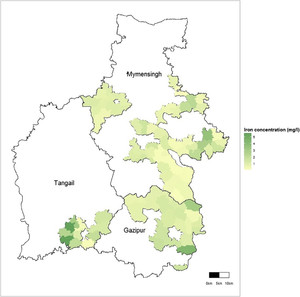 We assessed the ability of sodium dichloroisocyanurate (NaDCC) to provide adequate chlorine residual when used to treat groundwater with variable iron concentration. We randomly selected 654 tube wells from nine subdistricts in central Bangladesh to measure groundwater iron concentration and corresponding residual-free chlorine after treating 10 L of groundwater with a 33-mg-NaDCC tablet. We assessed geographical variations of iron concentration using the Kruskal–Wallis test and examined the relationships between the iron concentrations and chlorine residual by quantile regression. We also assessed whether user-reported iron taste in water and staining of storage vessels can capture the presence of iron greater than 3 mg/L (the World Health Organization threshold). The median iron concentration among measured wells was 0.91 (interquartile range [IQR]: 0.36–2.01) mg/L and free residual chlorine was 1.3 (IQR: 0.6–1.7) mg/L. The groundwater iron content varied even within small geographical regions. The median free residual chlorine decreased by 0.29 mg/L (95% confidence interval: 0.27, 0.33, P < 0.001) for every 1 mg/L increase in iron concentration. Owner-reported iron staining of the storage vessel had a sensitivity of 92%, specificity of 75%, positive predictive value of 41%, and negative predictive value of 98% for detecting > 3 mg/L iron in water. Similar findings were observed for user-reported iron taste in water. Our findings reconfirm that chlorination of groundwater that contains iron may result in low-level or no residual. User reports of no iron taste or no staining of storage containers can be used to identify low-iron tube wells suitable for chlorination. Furthermore, research is needed to develop a color-graded visual scale for iron staining that corresponds to different iron concentrations in water.

Although several groundwater chemicals react with chlorine-based disinfectants, dissolved iron in groundwater often correlates with high levels of other dissolved cations10 and could, therefore, be a useful proxy for overall chlorine demand from inorganic cations. The ferrous form of iron is commonly present in groundwater in Bangladesh7 and elsewhere11 because of anoxic conditions,12 which contributes to the redox potential of groundwater.13 In the presence of chlorine, the ferrous form is oxidized to the ferric form, and the chlorine residual is consumed in the process.14 This phenomenon has been observed in several studies of water distribution systems. Free residual chlorine decreases, while water flows through distribution systems comprised iron pipes,15,16 and the loss of residual is more pronounced for unlined iron pipes.17 Similarly iron present in groundwater decreases the concentration of chlorine residual.18 Such reduction in chlorine residual weakens the protection against microbial contamination.18–21 Therefore, chlorine disinfection is not recommended for groundwater with high iron content unless the iron is removed.

A country-wide groundwater survey in Bangladesh (British Geological Survey [BGS]-Department of Public Health Engineering) demonstrated the regional and geographical variation in iron concentration.22 Although the survey suggested that several regions had a relatively low groundwater iron content for which chlorination may be a feasible water disinfection method, there may be a local (e.g., village level) variation whereby wells with high iron concentration are found within relatively low iron areas. Large-scale water chlorination projects may fail if such variation of groundwater iron concentration is not taken into account.

We conducted a study in three districts of rural Bangladesh with relatively low groundwater iron where a large randomized-controlled trial (water quality, sanitation, and hand washing [WASH] Benefits, http://www.washbenefits.net/) of water, sanitation, hygiene, and nutrition interventions including drinking water treatment with sodium dichloroisocyanurate (NaDCC) tablets was implemented.26 This study was conducted before trial implementation to screen sites for the WASH Benefits Bangladesh trial. Our objectives were to assess whether 1) small-scale geographic variation of iron concentration may exist in these relatively low groundwater iron areas, 2) NaDCC tablets provide the recommended chlorine residual when used to chlorinate groundwater with varying iron concentration, and 3) user-reported iron taste and iron staining on storage containers are accurate proxy indicators of high groundwater iron concentration.

Research staff identified owners of the selected tube wells to test their tubewell water and collect well-related information. They recorded information on the tubewell depth, year-round water availability, and owners’ perception of iron taste in tubewell water and storage vessel staining. They asked “yes–no” questions to all owners on whether they felt there was an iron taste in their well drinking water and whether they observed iron staining on their water storage vessels. In the large-scale study, trained research staff also visually observed reddish-brown staining inside storage containers to confirm owners’ reports of staining. Research staff underwent field-based training where they visually inspected a number of stained-storage containers before the large-scale study.

Iron concentration in water was measured onsite using a Hach Pocket Colorimeter II for Iron (FerroVer®; Hach, Loveland, CO; detection range: 0.02–5.00 mg/L). Research staff then collected a separate 10-L tubewell water sample and added one 33-mg-NaDCC tablet, calculated to provide an initial free chlorine dose of 2 mg/L. After 30 minutes, residual-free chlorine was measured using a Hach Pocket Colorimeter II for chlorine (Hach; detection range: 0.02–2.00 mg/L, precision: ±0.05 mg/L). If iron concentration was detected in the upper limit (≥ 5 mg/L) and the residual chlorine concentration was less than 0.2 mg/L after adding a 33-mg-NaDCC tablet, they added an additional 33-mg-NaDCC tablet. The 30-minute period was selected to represent the CDC-recommended time window for effective disinfection after adding NaDCC; this time period is sufficient for the rapid oxidation reactions between inorganic cations and free chlorine to occur.5

Union: administrative unit of a subdistrict; for each union, 12 tube wells were sampled.

The region selected for this study was reported by the BGS in 2001 to have low average iron concentration; we detected a similar median iron concentration (0.9 mg/L) in this study conducted approximately 10 years later, surveying a larger number of tube wells within selected sites (N = 654) than the BGS (N = 84). Even though the sites were considered to have a low average iron concentration, we found variation across small geographical units (i.e., villages) and large geographical units. In our large-scale study, we found that between 4% and 38% of wells had an iron concentration greater than 3 mg/L. Based on these findings, we did not recommend the Mirzapur subdistrict as a potential site for the WASH Benefits Bangladesh study as 38% of wells in this subdistrict had an iron concentration greater than 3 mg/L. The variability in iron concentration was similar to that found in a study conducted in a smaller area of northwestern Bangladesh.23 Local variability can be explained by geochemical properties of groundwater aquifers.28 The source of dissolved ions in groundwater includes mineral accumulations in rocks near the land surface;11 thus iron-containing materials are usually present in shallow aquifers. Moreover, dissolved organic matter in shallow aquifers in Bangladesh can act as a substrate for iron-reducing bacteria, enhancing iron concentration in superficial layers. These factors may explain the inverse relationship between the iron concentration and estimated tubewell depth.23,29

We identified a statistically significant inverse association between free residual chlorine and iron concentration in groundwater, which confirms findings from several studies that the high water iron content reduces the effectiveness of chlorination. In our study site with generally average low groundwater iron content, almost one in five tube wells had an iron concentration greater than 3 mg/L, and optimal residual was not achieved for one in six tube wells tested. Elsewhere in Bangladesh, the average iron concentration is often higher,27 and thus failure to achieve optimal chlorine residual is likely.23 A high initial chlorine dose would be required to achieve residual > 0.2 mg/L for wells with high iron concentration, which may preclude acceptability and uptake because of unpleasant taste and odor of treated water.30

Given the geographical variability in groundwater iron concentrations, the need to identify tube wells with high iron content during large-scale chlorination interventions presents an obstacle to using chlorine to treat groundwater. Measuring iron concentration for each well to recommend a targeted chlorine dose is not feasible. In our study, owner-reported iron taste and staining of water storage containers had high sensitivity, specificity, and negative predictive values but low positive predictive values. Nevertheless, iron staining of the storage containers was a better proxy than iron taste in water to detect high-iron wells. The high sensitivity of these proxies suggests that household members can accurately identify tube wells with iron concentration > 3 mg/L 84% of the time; similar findings have been reported by others.23 The high negative predictive values suggest that among wells that are reported by users to be iron free, a high proportion (95%) is likely to have low iron concentrations at the time of testing. Therefore, areas where owners report no iron taste or staining of storage vessels may indicate those where chlorination is appropriate. We advise programs promoting POU chlorination to target households that use wells where owners report no iron taste or staining of storage vessels. In contrast, the low positive predictive values suggest that among wells where users report high iron, only a small proportion (36%) truly has high concentrations (> 3 mg/L) at the time of testing.

Our study had certain limitations. We measured the iron concentration of tube wells at a single time point. However, seasonal variation in iron concentration has been observed in shallow and deep groundwater aquifers in Bangladesh,31 which may affect our sensitivity and specificity estimates. It is likely that owner-reported iron taste in tubewell water reflects the iron content over a longer recall period rather than at the time of testing. Therefore, such proxy information may be a better metric than a one-time iron measurement to identify wells where the high-iron content in the long run will render chlorination ineffective. Our research staff visually confirmed the presence/absence of iron staining of the storage containers, which does not provide quantitative information about the iron concentration in water. Iron corrosion scales to quantify the extent of corrosion in water distribution systems32 and commercial iron testing strips with color charts have been useful in other settings to assess the concentration of iron in water. A similar scale can be developed to quantify the extent of staining on containers. For example, a visual staining scale with different color grades corresponding to different categories of iron concentrations can allow semiquantitative assessment of iron concentration inwater.

Although we only tested iron, other groundwater inorganic cations interact with chlorine in a similar fashion. Nevertheless, there are positive correlations between groundwater iron concentration and other chemicals such as arsenic and manganese; our iron measurements therefore may have been indicative of the presence of a range of chemicals exerting chlorine demand.33

Our data reconfirm the findings of other studies that chlorination is not a practical water treatment method in settings with high groundwater iron concentration. When iron testing is not feasible, we recommend using owner-reports of absence of iron taste in groundwater or absence of storage containers’ staining to identify tube wells suitable for chlorination.