Seasonal distribution of malaria and dengue cases in Zhejiang province, China, 2011–2016. (A) The seasonal indices of Plasmodium falciparum malaria (dashed line), Plasmodium vivax malaria (dash-dotted line), and all types of malaria (solid line). (B) The seasonal indices of dengue. The index for a given month was calculated by the average case number of that month divided by monthly the average monthly cases during the 6 years (2011–2016). 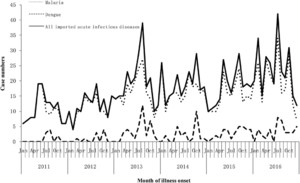 To explore epidemiological characteristics of imported acute infectious diseases between 2011 and 2016 in Zhejiang province, China. Data of imported infectious diseases from 2011 to 2016 was collected from the China Information System for Disease Control and Prevention in Zhejiang province, and subsequently analyzed for epidemiological characteristics. A survey was conducted to investigate clinicians’ abilities to diagnose these diseases in Zhejiang province. From 2011 to 2016, 1,241 cases of imported acute infectious disease were reported in Zhejiang province, including 1,078 malaria cases, 156 dengue cases, three chikungunya fever cases and four Zika cases. Between 2011 and 2016, incidences of these diseases increased (P < 0.001). For malaria, male adults for labor export were the most affected group. Seasonal fluctuation was not obvious. Plasmodium falciparum was the main malaria type (822 cases) and most cases were acquired from African Region (791/822, 96.1%). Plasmodium vivax cases (194 cases) were mainly from African Region (78/194, 40.2%) and South-East Asia Region (51/194, 26.3%). Meanwhile, for dengue, adults and tourists were the most affected groups. The incidence of dengue was particularly high in August and October. The percent of correct clinician responses in the survey of diagnosis knowledge was 54.6% (standard deviation = 21.0%); this percentage was particularly low in general practitioners and clinicians from township hospitals. The capabilities of clinicians to diagnose these diseases were low and should be improved. Efforts should be made in improving and disseminating proper preventive measures of high-risk populations, surveillance of imported cases, and prevention and control of local epidemics.