Rift Valley fever virus immunoglobulin G (IgG) antibody prevalence (orange boxes) in cattle populations in Mali from 2005 to 2014. The recent human case has been denoted by a star (blue box). The prevalence in regions varied from 0% to approximately 16%. This figure appears in color at www.ajtmh.org. 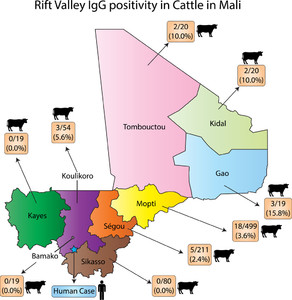 Rift Valley fever virus (RVFV) outbreaks have considerable impact on human and animal health. Here, we are reporting a serosurvey of cattle from all regions of Mali. These demonstrated that few had been exposed to RVFV from 2005 to 2014. Recent outbreaks of RVF in Niger and a single human case in Mali provide justification for further entomological and ecological studies of this virus.

Rift Valley fever virus (RVFV, family Phenuiviridae, genus Phlebovirus) is an emerging mosquito-borne pathogen with high consequences for livestock and human populations.1 In humans, RVFV infection is typically self-limiting and mild; however, a small percentage of cases present with more severe and life-threatening manifestations, including encephalitis and hemorrhage.2 In livestock such as cattle, sheep, and goats, RVFV infection most commonly results in abortions.3 Humans typically become infected after the bite of an infected mosquito or through direct contact with tissues or fluids from an infected animal, most commonly during slaughter.2 RVFV is endemic to Africa and the Arabian peninsula.4 In the West African region, RVFV activity in humans, ruminants, and vectors has been reported in Senegal, Burkina-Faso, Niger, and Mauritania5; however, the prevalence of RVFV in many other countries, including Mali, remains unknown. In 2016, 266 probable human cases of RVF including 32 deaths were documented in Niger, Mali’s northeastern neighbor.6 Of these human cases, approximately 40 occurred in Malians.7 Before this report, there was a single case of RVF in a citizen of France, who was a kidney transplant recipient, returning from travel in Mali.8 In July 2017, a laboratory-confirmed human case of RVF was diagnosed by the Pasteur Institute in Dakar, Senegal, which led to the declaration of an outbreak by the regional office of the World Health Organization.9 The patient is believed to be the first confirmed RVFV case with no travel history occurring in sub-Saharan Mali, which is the most populated area of the country with respect to both humans and animals, and accentuates public health and economic concerns in this region.9 It remains unclear if the apparent lack of documented cases of RVFV infection in Mali can be attributed to little or no virus circulation or to under-reporting/misdiagnosis, as we have previously shown for other viral diseases in this region.10

For this seroepidemiological study, 941 bovine serum samples collected between 2005 and 2014 were retrospectively tested for the presence of immunoglobulin G (IgG) antibodies reactive to RVFV. The samples were obtained from the Central Veterinary Laboratory serum bank in Mali and were collected as part of the Malian national transboundary animal diseases surveillance program. The samples were from different regions in Mali, namely, Bamako city (N = 19), Gao (N = 19), Kayes (N = 19), Kidal (N = 20), Koulikoro (N = 54), Mopti (N = 499), Segou (N = 211), Sikasso (N = 80), and Tombouctou (N = 20).

Inactivated Vero cell lysates were used as positive (infected with RVFV Kenya-2007/31-p2) and negative (mock infected) antigens. Ninety-six–well Costar high-binding round-bottom assay plates were coated with 0.05 μg/well of either antigen diluted in 0.1 M phosphate-buffered saline (PBS) (pH 7.4) in a total volume of 100 μL. The plates were covered and incubated overnight at 4°C and washed three times with 300 μL of PBS–Tween 20 (0.1%) on an automated 96-well plate washer immediately before use. Serum samples were diluted to 1:400 in PBS–Tween 20 (0.2%) supplemented with 5% goat serum. One hundred microliters of each sample was added in parallel to a positive and negative antigen plate, incubated at 37°C for 1 hour, and washed as previously described. A peroxidase-labeled goat anti-bovine IgG secondary antibody (0.05 μg in 100 μL per well, Kirkegaard & Perry Laboratories, Inc., Catalog no. 14-12-06) was added, incubated for 1 hour at 37°C, and washed as previously described. Peroxidase substrate (2,2′-azino-bis(3-ethylbenzthiazoline-6-sulfonic acid)) was added to each well and color development was quantified 30 minutes later by measuring the optical density at 405 nm using an ELISA microplate reader.

Before screening the Malian samples, the RVFV IgG ELISA was validated with 80 bovine serum samples obtained from the Canadian Food Inspection Agency and used as a negative reference panel, and two serum samples collected on days 27 and 38 postinfection from a single bovid experimentally infected with RVFV (strain ZH501) were used as positive controls.

Samples that were positive in the ELISA screen were further tested by the PRNT assay. The samples were diluted two-fold (1:40 through 1:160) and incubated (37°C, 1 hour) with 50 plaque-forming units of RVFV (strain ZH501) in a total volume of 500 μL. After the incubation, 200 μL of the virus/serum mixture was added to confluent monolayers of Vero cells in 12-well plates, incubated for 1 hour, and washed. The cells were overlaid with minimum essential medium containing 2% fetal bovine serum and 2% low-melt agarose and 4 days later, stained with 0.2% crystal violet and 4% formalin. The following morning, both overlays were discarded and plaques were enumerated to calculate the PRNT90.

The ELISA cutoff value was determined to be 0.33 by calculating the mean of the negative reference panel values and then adding 3× standard deviations.

A total of 34 of the 941 bovine samples were positive for RVFV IgG antibodies in the initial ELISA assays, 33 of which were confirmed in the PRNT with PRNT90 titers of ≥ 160 (Figure 1). The seropositivity in Mali ranged from 0% to 16%. Regionally, the prevalence was as follows: Segou 2.4%, Mopti 3.6%, Koulikoro 5.6%, Kidal 10.0%, Tombouctou 10.0%, and Gao 15.8%. Interestingly, none of the samples from the cattle in the Sikasso (a major agricultural hub in Mali), Bamako city, or Kayes regions demonstrated exposure to RVFV. The recent confirmed human case of RVF occurred in Ouléssébougou which is near the border of Koulikoro and Sikasso regions, approximately 80 km south of Bamako, which suggests that RVFV may have recently established itself in this area of Mali.

This survey captures the seroprevalence of RVFV antibodies in Malian cattle between 2005 and 2014 and provides a benchmark against which future prevalence studies in these regions can be compared. Furthermore, the recent outbreaks in Niger and the single human case in Mali highlight the urgent need for increased surveillance for RVFV in parts of West Africa.