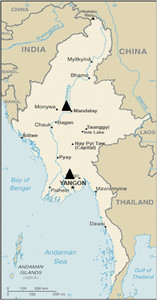 Zika virus (ZIKV), an emerging mosquito-borne flavivirus, causes a dengue-like infection that has recently caught global attention. The infection, which also includes some birth defects, has been documented in the Americas, Pacific Islands, and some parts of Africa and Asia. There are no published reports on local ZIKV transmission in Myanmar. In this study, a total of 462 serum samples from patients and asymptomatic persons were collected in Myanmar from 2004 to 2017. They were analyzed for ZIKV infection by immunoglobulin M capture enzyme-linked immunosorbent assay (ELISA), immunoglobulin G indirect ELISA, neutralization test, real-time polymerase chain reaction (PCR), and conventional PCR. Our study confirmed ZIKV infection in 4.9% of patients with clinical dengue symptoms and in 8.6% of persons who were asymptomatic. This is the first report on ZIKV infection in Myanmar and it suggests the occurrence of ZIKV infection in two geographically distinct sites in this country since at least 2006.

Zika virus (ZIKV; family Flaviviridae, genus Flavivirus) is mainly transmitted to humans by the bite of Aedes mosquitoes. The first human case of ZIKV infection was reported in 1954 in Nigeria and sporadic cases have been reported in Asia.1 In 2007, the first known ZIKV outbreak happened in Yap Island, Micronesia. Subsequently, major epidemics in French Polynesia, New Caledonia, Cook Island, Easter Island, America, and Brazil occurred between 2013 and 2015.1 The classical clinical ZIKV infection resembles that of dengue and chikungunya, and is characterized by the presence of fever, rash, headache, arthralgia, myalgia, conjunctivitis, and edema. An estimated 80% of ZIKV-infected persons are asymptomatic.2 Although the disease is self-limiting, cases of neurologic manifestations have been described. Studies document the link between ZIKV and microcephaly and other birth defects, as well as, Guillain–Barré syndrome.2

Myanmar, a dengue-endemic country, has experienced dengue outbreaks since 1970.3 Here, the incidence of dengue has increased over the past 43 years with an upward trend and case fatality rates varying from 0.2% to 6.4%.4 ZIKV infections have been reported in 67 countries since 2015, and in Asia, cases have been found in neighboring Thailand, Indonesia, Singapore, Malaysia, China, and Vietnam.5 In October 2016, the Ministry of Health and Sports confirmed a first case of ZIKV infection in a pregnant foreigner in Myanmar.5 Because there are no published reports on ZIKV infection among the locals, we conducted a serological and molecular study of ZIKV infection among dengue-suspected patients and healthy persons by using their serum samples collected during 2004–2017.

The ZIKV infection in Myanmar at different locations (Figure 1) was studied by using 1) acute-phase serum samples collected from dengue-suspected patients in Mandalay Children Hospital during 2004–2006, 2008–2010, 2013, and 2015 and 2) serum samples collected from apparently healthy persons (asymptomatic) in March 2017 during periodic medical examinations in Yangon private clinics. All patients and asymptomatic persons had no travel history. The Ethics Review Committee on Medical Research Involving Human Subjects in Myanmar approved the study protocol (number 097/2017). We selected 381 acute serum samples from patients showing symptoms of dengue. These samples were previously tested for the presence of immunoglobulin M (IgM) antibody to dengue virus (DENV) by our in-house DENV IgM capture enzyme-linked immunosorbent assay (ELISA).6 They were found to be either negative for the antibody or with low positive P/N (positive control or sample optical density [OD]/negative control OD) ratios of 2:5. No convalescent samples were available from the patients. From asymptomatic persons were 81 samples, which were subjected to the in-house DENV IgM capture ELISA.6 All the 462 serum samples from symptomatic and asymptomatic persons were subjected to Japanese encephalitis virus (JEV) IgM capture ELISA using the previous procedures6 and similar procedures were used for the in-house ZIKV IgM capture ELISA with the antigen from ZIKV strain MR 766. The OD was read at 492 nm and a P/N ratio ≥ 2 was considered positive. The P/N ratios of IgM antibodies against ZIKV, DENV, and JEV were compared and the infecting virus was determined by the highest ratio. To test the presence of immunoglobulin G (IgG) against flaviviruses, we tested serum samples by using an in-house IgG indirect ELISA.7 A standard curve was prepared using the OD492 values of the flavi-positive control serum sample starting with a 1,000-fold dilution, then with serial 2-fold dilutions. A sample titer equal to or greater than 1:3,000 was considered positive.

To confirm the status of ZIKV infection and characterize it further, the ZIKV IgM–positive serum samples were checked for the ability to neutralize ZIKV, DENV 1–4, and JEV by 50% focus reduction neutralization test (FRNT50).6,8 The reciprocal of the end point serum dilution that provided a ≥ 50% reduction in the mean number of foci relative to the control wells that contained no serum was considered to be the FRNT50 titer. From samples that were either negative or positive by ZIKV IgM ELISA, RNA was extracted by using a QIAamp Viral RNA Mini Kit (QIAGEN, Hilden, Germany) and real-time polymerase chain reaction (PCR) was conducted by using TaqMan Fast Virus 1-step master mix kit (Applied Biosystems, Foster City, CA) with three published primer sets for PrM, E, and NS5 gene.9,10 Conventional nested PCR (Takara, Shiga, Japan) was done by using published primers for ZIKV NS3 gene following the manufacturer’s instructions.11 Because of the limited volume of serum samples, only 150 samples (65 ZIKV IgM negatives and 85 ZIKV IgM positives) had RNA extracts and thus they were subjected to real-time PCR and conventional PCR. Considering the World Health Organization standard12 and published study,13 we confirmed a case as ZIKV infection from the 150 samples if ZIKV RNA was detected in the serum by using any of the three primer sets. Neutralization titer against ZIKV ≥ 4 times compared with that of other flaviviruses was used to further confirm ZIKV infection if a negative result was obtained with ZIKV real-time PCR.

All the 65 ZIKV IgM–negative samples gave negative results for ZIKV real-time PCR. Of the 85 ZIKV IgM positives (Table 1), a total of 26 samples were positive to ZIKV real-time PCR in either two or three primer sets (Table 2), thus confirming ZIKV infection. They also had higher ZIKV IgM P/N ratios than those of DENV and they neutralized ZIKV. Out of them, 17 revealed four times higher neutralization titers against ZIKV than all those against all the DENV serotypes. The other nine samples showed either less or comparable or not four times higher neutralization titers against ZIKV than those against DENV serotypes and JEV. The 150 serum samples with RNA extracts had negative results for conventional PCR.

Characterization and confirmation of ZIKV infection among symptomatic and asymptomatic persons positive for ZIKV IgM, Myanmar, 2004–2017

ZIKV: Considering the WHO guidelines, infection due to ZIKV was based on the positive result for ZIKV real-time PCR in any of the three primer sets and further positive confirmation by ZIKV IgM ELISA. Neutralization titers of serum samples against the ZIKV, DENV, and JEV were also taken into consideration just if no clear-cut results would be obtained.

We report the occurrence of a local ZIKV infection among dengue-suspected patients and healthy persons in two distinct sites in Myanmar since at least 2006. The positive rates of confirmed ZIKV cases were 47.2% (17/36) among the ZIKV IgM positives only and 18.3% (9/49) for those positives in both ZIKV and DENV IgMs (Tables 1 and 2). The positive results for the presence of both IgMs could be due to the cross-reaction of the Zika IgM against DENV which belongs to the same virus family as ZIKV.14 This could also be due to the coinfections or sequential infections of the patients by DENV and ZIKV, which are transmitted by the same mosquito species circulating in the same area.15 Coinfection with ZIKV and DENV in the same patient has been reported in New Caledonia.16

Conventional PCR done to all serum samples positive by real-time PCR showed negative results which could be due to unfavorable storage of the samples or repeated freezing and thawing of serum samples or their low viremia level. Based on the tested samples for ZIKV IgM, 4.9% (19/381) of dengue-suspected patients and 8.6% (7/81) of asymptomatic persons were confirmed ZIKV cases. The infection could have been mild in asymptomatic person; hence, it was not detected. The result was similar in French Polynesia.20 Interestingly, the percentage of ZIKV positives from asymptomatic group was higher than that of the symptomatic group despite the small sample size of the former. Among the asymptomatic adults, 96.2% of them had anti-flavi IgG and it could be that they were previously infected with flaviviruses. The low percentage of IgM-positive samples from the symptomatic group could be due to their collection during the acute phase (day 1–7 post symptoms, Table 2) and hence still negative for the antibodies. With the previously mentioned findings, clinicians or basic scientists need to consider ZIKV in the differential diagnosis of patients with dengue-like illness in epidemiological surveillance. Seroprevalence studies and control strategies should be considered in Myanmar.