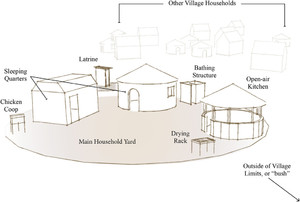 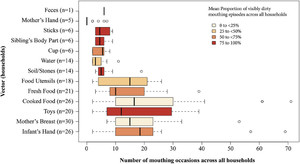 Undernourished children in low-income contexts often suffer from environmental enteric disorder—damage to the intestines probably caused by chronic exposure to bacterial pathogens from feces. We aimed to identify strategies for reducing infants and young children’s (IYC) exposure to human and animal feces in rural farming families by conducting direct observation of 30 caregiver–infant dyads for 143 hours and recording water, sanitation, and hygiene (WASH)–related behaviors to identify possible pathways of fecal–oral transmission of bacteria among IYC in rural Zambia. In addition to mouthing visibly dirty hands, toys, sibling’s body parts, and food, 14 IYC actively ingested 6.1 ± 2.5 (mean ± standard deviation [SD]) pieces of soil and stones and one ingested animal feces 6.0 ± 0 times in the span of 5 hours. Ninety-three percent (21 of 30) of mothers reported observing the index-child eating soil and 17% (5 of 30) of mothers reported observing the index-child eating chicken feces. Adult and child handwashing was uncommon, and even though 70% (28 of 30) of households had access to a latrine, human feces were found in 67% of homestead yards. Most animals present in the household were un-corralled, and the highest observable counts of feces came from chickens, pigs, and cattle. To protect IYC in low-income communities from the exploratory ingestion of feces and soil, Baby WASH interventions will need to interrupt fecal–oral microbial transmission vectors specific to IYC with a focus on feasibility, caregiver practices, and local perceptions of risk.