Diagram of experiment structure. In total, 520 bugs were used. This figure appears in color at www.ajtmh.org.

Box and whisker plots of survival metrics across instars and between treatments. (A, above) lx, the probability that a Cimex lectularius individual survives from the 1st instar to stage x. (B, below) gx, the probability of surviving from stage x to stage x + 1. In each column, control groups are represented on the left, and infected groups are represented on the right. Dots represent cohorts. Each box contains quartiles 1–3 of the data, the remaining 25% of the data along the whiskers, and min and max values at the whisker tips. Outliers (values ±1.5 times the upper and lower quartiles, respectively) are indicated by grey dots. All outliers are from replicate 1. Stars represent means. Horizontal lines within each box are medians. This figure appears in color at www.ajtmh.org.

Mean nymphal development time in weeks for infected and uninfected Cimex lectularius across replicates. Nymphal stages progress upward, beginning with the 1st instar (n1) and progressing to the 5th and final juvenile instar (n5). Error bars represent standard deviation from the mean. This figure appears in color at www.ajtmh.org.

Proportion of eggs that hatched by treatment and replicate. Control groups are shown on the left in each column; the infected groups are on the right. 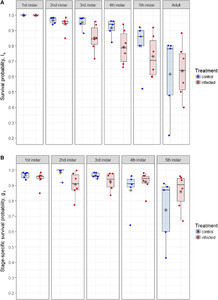 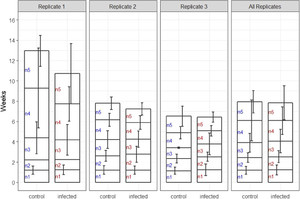 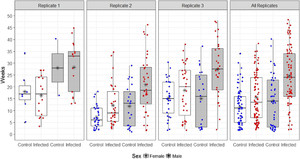 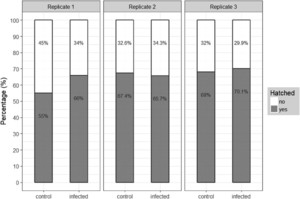 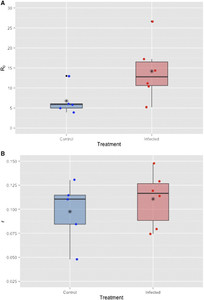 Trypanosoma cruzi Infection Does Not Decrease Survival or Reproduction of the Common Bed Bug, Cimex lectularius