Schematic representation of the CPR gene in Rhodnius prolixus. Exons are shown as shaded boxes and introns as horizontal lines. Exons and introns are labeled (5′ to 3′) with arabic and roman numerals, respectively. Their sizes in base pairs are indicated in the box (exons) and in parentheses (introns).

Relative expression (mRNA) of the CPR gene in the fat body of Triatoma infestans nymphs of the CRV-susceptible strain at different times after treatment with deltamethrin at LD50 concentration. The error bars represent the standard deviation of the mean. Two asterisks on the standard error bar indicate significant difference between the mean of the treatment with the insecticide and the mean of the control at P < 0.01. 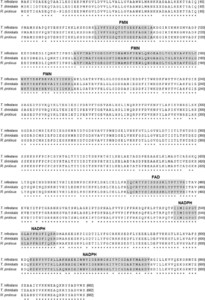 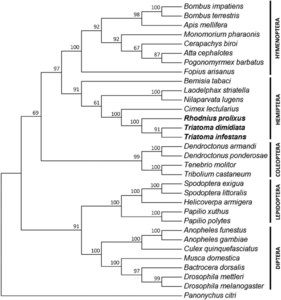 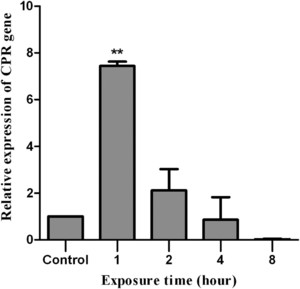 Pyrethroid resistance has been detected in Triatoma infestans (Hemiptera: Reduviidae), which was atributed to target site insensitivity and increased oxidative metabolism of the insecticide by cytochrome P450s. Nicotinamide adenine dinucleotide phosphate (NADPH) cytochrome P450 reductase (CPR) plays an essential role in transferring electrons from NADPH to the P450-substrate complex. In this study, the full length CPR cDNA of T. infestans was isolated and gene expression was determined by quantitative polymerase chain reaction. The open reading frame is 2,046 bp long, encoding a protein of 682 amino acids. Amino acid sequence analysis indicates that the T. infestans CPR and the putative Rhodnius prolixus and Triatoma dimidiata CPRs present conserved ligand-binding domains. Congruent with a previous study of our laboratory, in which the expression of three cytochrome P450 genes (CYP4EM7, CYP3085B1, and CYP3092A6 genes) was induced by deltamethrin, the levels of T. infestans CPR mRNA were upregulated in the fat body of fifth instar nymphs after topical application of deltamethrin. Besides, as it was observed in the CYP4EM7 gene, it was detected overexpression of the CPR gene in the most resistant strain of T. infestans included in the study. These results suggest that CPR plays an essential role in P450-mediated resistance of T. infestans to insecticides.