Determination of the detection limit of Plasmodium knowlesi recombinase polymerase amplification (RPA). A 10-fold serial dilution of the stock (105 P. knowlesi parasites (p)/μL to 1 p/μL) was performed with sterile distilled water. The DNA template from each of the serial dilutions was tested in duplicate and repeated twice. Strip 1, 2, 3, 4, 5, and 6 indicate RPA assay using 105 to 1 p/μL as template. This figure appears in color at www.ajtmh.org. 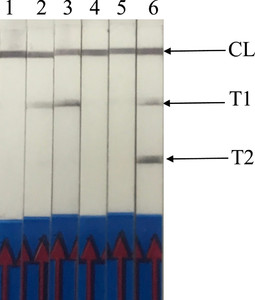 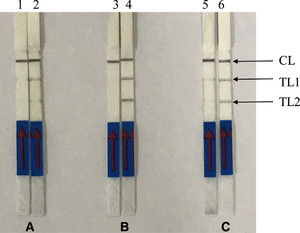 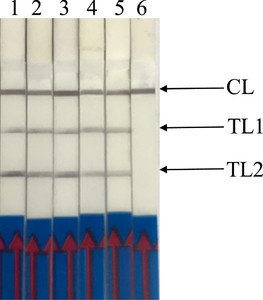 The aim of this study was to develop a recombinase polymerase amplification (RPA) combined with a lateral flow (LF) strip method for specific diagnosis of Plasmodium knowlesi. With incubation at 37°C, the 18S rRNA gene of P. knowlesi was successfully amplified within 12 minutes. By adding a specifically designed probe to the reaction solution, the amplified RPA product can be visualized on a LF strip. The RPA assay exhibited high sensitivity with limits of detection down to 10 parasites/μL of P. knowlesi. Nonetheless, it was demonstrated that all P. knowlesi (N = 41) and other Plasmodium sp. (N = 25) were positive while negative samples (N = 8) were negative. Therefore, a combination of RPA and LF strip detection is a highly promising approach with the potential to be suitable for use in resource-limited settings.