Cumulative proportion of severe malaria cases showing that nearly 90% of cases observed before the age of 15 years. This figure appears in color at www.ajtmh.org.

Map of the Bugoye sub-county highlighting the villages with higher (Ihani) and lower (Izinga) relative risk of severe malaria, compared with Bugoye village, where the health center is located. This figure appears in color at www.ajtmh.org.

Box plots showing log-transformed parasite densities (A), hemoglobin levels (B), venous lactate (C), and serum bicarbonate levels (D), among those with uncomplicated and severe malaria stratified by age category. The dashed red line represents the respective threshold for severe malaria for each measure. This figure appears in color at www.ajtmh.org.

Prevalence of clinical findings among patients with severe malaria as reported in recent studies in the sub-Saharan African Region. This figure appears in color at www.ajtmh.org. 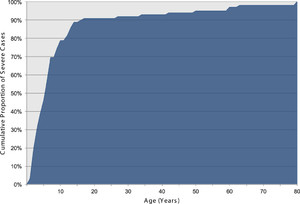 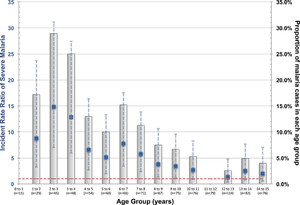 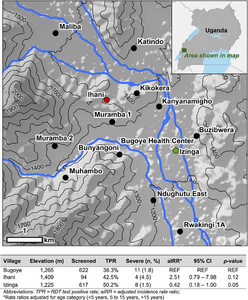 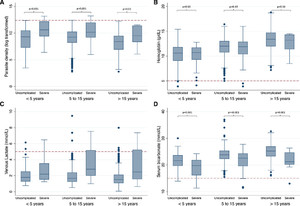 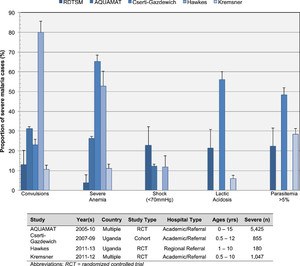 The clinical epidemiology of severe malaria among patients presenting to peripheral health centers has not been well described. We conducted a prospective, observational cohort study to describe the epidemiology and clinical manifestations of severe malaria in a highland area of declining transmission intensity in Western Uganda. Individuals presenting with a history of fever were screened with a malaria rapid diagnostic test (RDT). We prepared blood smears and conducted clinical and laboratory testing for those with a positive RDT. We defined severe malaria in accordance with World Health Organization guidelines for research and epidemiological studies. A total of 6,641 individuals underwent testing for malaria. Ninety-six of 1,462 (6.6%) participants with confirmed parasitemia satisfied the criteria for severe malaria. The incidence of severe malaria peaked between 2 and 3 years of age (incidence rate ratio = 17.1, 95% confidence interval = 8.4–34.9, P < 0.001) and then declined steadily until age 10. However, we also found a second peak among those ≥ 50 years of age. Severe anemia was uncommon, detected in only 5.3% of cases. Instead, shock (22.2%) and lactic acidosis (19.4%) were most frequently encountered. Our results suggest that the clinical characteristics of severe malaria presenting to rural, peripheral health centers may be different than previously observed in referral centers. These findings merit further investigation into the optimal methods for identification and management of severe malaria in rural health centers in the region.