Map of Nicaragua showing its departments and the seven departments surveyed comprising the Pacific region. 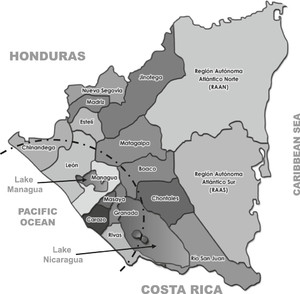 Enteroparasites in Preschool Children on the Pacific Region of Nicaragua

The aim of this study was to determine for the first time the prevalence of enteroparasites in preschool children originating from the seven departments of the Pacific region in Nicaragua. One stool sample of each of 1,217 children, from 6 months to 5 years of age, was collected and personal data were recorded on delivery of the container. Samples fixed in 10% formalin were processed by a formol-acetate concentration and a modified Ziehl–Neelsen technique. The overall prevalence of enteroparasite infections was 68.2% with a total of at least 20 species. Blastocystis hominis (45.5%), Giardia intestinalis (31.7%), Trichuris trichiura (8.2%), and Ascaris lumbricoides (5.2%) were the most prevalent protozoa and helminth species in the total study as well as in all departments. Protozoan prevalence presented a statistically significant difference by gender (male: 69.6%; female: 46.7%; P < 0.001), and males presented a higher T. trichiura infection rate than females (male: 9.9%; female 6.4%; P < 0.035). Protozoan prevalence increased with age with a statistically significant difference (P < 0.001). Helminths were always more prevalent in urban areas (P < 0.0002). Protozoan infections result statistically higher than helminth infections so that water-based transmission could be suspected. Based on the differences with respect to species and parasite prevalence between the seven departments in the Pacific region of Nicaragua, the exploration of local factors associated with the transmission of enteroparasites should also be considered to reduce infection.