Sampling scheme. The participants’ responses to the screening questionnaire were reviewed by the study physician and reexamined by the neurologist thereafter. Participants were classified as being “patients with neurological manifestations” or “manifestation-free participants.” The commercial enzyme-linked immunoelectrotransfer blot (EITB) test panel was smaller than the other serum test panels because of the shortage of diagnostic kits from the distributor. See also MATERIALS AND METHODS. 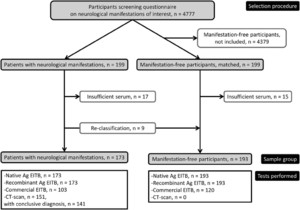 Current guidelines for the diagnosis of neurocysticercosis (NCC) recommend the use of the lentil lectin-bound glycoprotein enzyme-linked immunoelectrotransfer blot assay (LLGP-EITB) as the reference standard for serological testing. In response to the drawbacks involved with the use of the LLGP-EITB, a recombinant T24H antigen (rT24H) EITB assay was developed, with promising results. However, the test has yet to be evaluated among individuals from sub-Saharan Africa (SSA). The aim of the present study was to investigate the performance of the rT24H EITB assay for the detection of NCC cases in a panel of serum samples (N = 366, of which 173 patients presented with epileptic seizures and/or severe chronic headaches, and 193 matched manifestation-free participants) collected as part of a large community-based trial in Burkina Faso. A perfect agreement between the rT24H EITB and the native gp24 (and its homodimer, gp42) LLGP-EITB was found (kappa value of 1.0). Furthermore, among patients with the neurological manifestations of interest who underwent a computed tomography scan, the rT24H EITB and native antigen LLGP-EITB had a comparable ability to correctly identify NCC cases with multiple viable (rT24H: sensitivity: 80.0%), single viable (66.7%), and calcified/degenerating cysts only (25.0%), albeit for multiple viable and calcified cysts, the rT24H estimated sensitivity seemed lower, but more uncertain, than previously reported. The rT24H EITB specificity was high (98.2%) and in line with previous studies. This study confirms the value of the recombinant rT24H EITB as an alternative to the native antigen LLGP-EITB for the diagnosis of NCC in a SSA community setting.