Map of West Africa highlighting locations of study centers. This figure appears in color at www.ajtmh.org.

Prevalence of malaria caused by Plasmodium falciparum infection at first ANC visit by month in Ghana, Burkina Faso, Mali, and The Gambia. This figure appears in color at www.ajtmh.org.

Prevalence of malaria caused by Plasmodium falciparum infection at first ANC visit by duration of pregnancy in the rainy season in Ghana, Burkina Faso, Mali, and The Gambia. This figure appears in color at www.ajtmh.org. 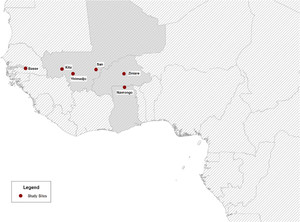 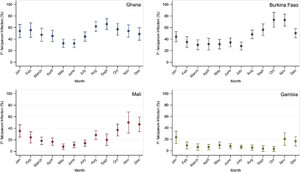 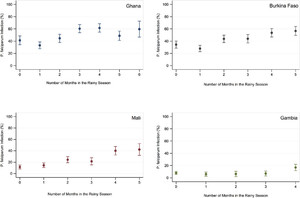 Seasonal Dynamics of Malaria in Pregnancy in West Africa: Evidence for Carriage of Infections Acquired Before Pregnancy Until First Contact with Antenatal Care

In malaria-endemic areas, Plasmodium falciparum prevalence is often high in young women because of 1) low use of insecticide-treated nets before their first pregnancy and 2) acquired immunity, meaning infections are asymptomatic and thus untreated. Consequently, a common source of malaria in pregnancy (MiP) may be infected women becoming pregnant, rather than pregnant women becoming infected. In this study, prevalence of infection was determined by microscopy at first antenatal care (ANC) visit in primigravidae and secundigravidae in Ghana, Burkina Faso, Mali, and The Gambia, four countries with strong seasonal variations in transmission. Duration of pregnancy spent in the rainy season and other risk factors for infection were evaluated using multivariable Poisson regression. We found that the overall prevalence of malaria at first ANC was generally high and increased with time spent pregnant during the rainy season: prevalence among those with the longest exposure was 59.7% in Ghana, 56.7% in Burkina Faso, 42.2% in Mali, and 16.8% in Gambia. However, the prevalence was substantial even among women whose entire pregnancy before first ANC had occurred in the dry season: 41.3%, 34.4%, 11.5%, and 7.8%, respectively, in the four countries. In multivariable analysis, risk of infection was also higher among primigravidae, younger women, and those of lower socioeconomic status, independent of seasonality. High prevalence among women without exposure to high transmission during their pregnancy suggests that part of the MiP burden results from long-duration infections, including those acquired preconception. Prevention of malaria before pregnancy is needed to reduce the MiP burden.