Adjusted prevalence of malaria-related outcomes after the first cycle of the 2015 SMC round, according the age and exposure status of the child. Prevalence estimates were obtained using a multilevel mixed-effects generalized model with propensity score weighting. This figure appears in color at www.ajtmh.org. 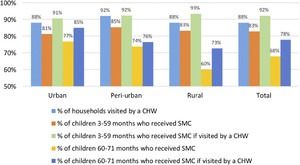 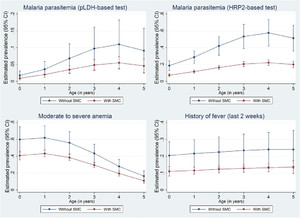 Seasonal malaria chemoprevention (SMC) for children < 5 is a strategy that is gaining popularity in West African countries. Although its efficacy to reduce malaria incidence has been demonstrated in trials, the effects of SMC implemented in routine program conditions, outside of experimental contexts, are unknown. In 2014 and 2015, a survey was conducted in 1,311 households located in Kaya District (Burkina Faso) where SMC had been recently introduced. All children < 72 months were tested for malaria and anemia. A pre–post study with control group was designed to measure SMC impact during high transmission season. A difference-in-differences approach was coupled in the analysis with propensity score weighting to control for observable and time-invariant nonobservable confounding factors. SMC reduced the parasitemia point and period prevalence by 3.3 and 24% points, respectively; this translated into protective effects of 51% and 62%. SMC also reduced the likelihood of having moderate to severe anemia by 32%, and history of recent fever by 46%. Self-reported coverage for children at the first cycle was 83%. The SMC program was successfully added to a package of interventions already in place. To our knowledge, with prevalence < 10% during the peak of the transmission season, this is the first time that malaria can be reported as hypo-endemic in a sub-Sahelian setting in Burkina Faso. SMC has great potential, and along with other interventions, it could contribute to approaching the threshold where elimination strategies will be envisioned in Burkina Faso.