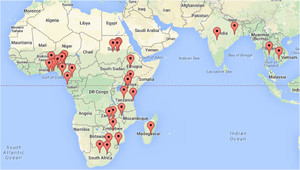 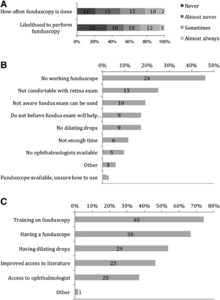 Cerebral malaria (CM) is a significant cause of mortality and morbidity in sub-Saharan Africa, particularly among young children. Malarial retinopathy is the most specific clinical finding in CM, and fundus examination could help clinicians distinguish CM from other causes of encephalopathy in resource-poor areas. To assess clinician knowledge, practice patterns, and barriers to the use of funduscopy in the diagnosis of CM, we designed a descriptive multinational survey of clinicians in malaria endemic areas. Results of this survey showed that 19% of respondents were not aware of the utility of eye examinations for malarial retinopathy, and almost half (49%) never or almost never examine the eyes in cases of suspected CM. Educating clinicians about malarial retinopathy could be important in improving diagnostic specificity for CM.