The capillary walls of the cerebral blood vessels are of continuous type with tight junctions and a continuous basement membrane which forms the blood brain barrier (BBB). It provides a physical resistance to the passage of lipophilic substances from the cerebral capillaries into the extravascular spaces. Gadolinium, a lipophilic magnetic resonance imaging contrast agent, does not cross an intact barrier. Following contrast administration, normal expected intracranial contrast enhancement can be seen within the vascular structures such as the arteries (A, yellow arrow) and veins (A, red arrow), cavernous sinuses (B, curved arrows), and in the limited circumventricular organs which have fenestrated basement membranes, and therefore, lack a BBB, such as the pituitary (B, vertical arrow) and choroid plexus (C, two headed arrow) as seen on these postcontrast T1-weighed images (TR–TE) in this 5-year-old female with cerebral malaria (CM). The lack of gross extravasation into other areas of the brain in this population of pediatric CM patients is indicative of an intact BBB. This figure appears in color at www.ajtmh.org.

Abnormal susceptibility-weighted imaging (SWI) signal is shown as dark signal within the structure indicating an increase in paramagnetic susceptibility. SWI (3D SWI TR 9500 TE 110 TI 2000 slice thickness 4/0 matric 512 × 256) phase comparing subjects with normal appearing brain tissue (A–C) and those with abnormal findings (D–F) in SWI. The splenium and genu of the corpus callosum (A, D), the junction of cortical gray matter and subcortical white matter (B, E), and cerebellum (C, F) are shown and labeled.

Gross pathologic image of a typical brain at autopsy (A) from a fatal pediatric patient (not from a participant in this study) demonstrates the presence of petechial hemorrhages in the white matter (black arrows, left half of image). If the cortical ribbon is demarcated from the white matter (blue line, right half of image), it is clear that the hemorrhages are restricted to the subcortical and deep white matter. Also note the swollen gyri. This correlates well with the in vivo magnetic resonance imaging (MRI) images seen specifically as low signal (arrows) on (B) susceptibility-weighted imaging (SWI) (3D SWI TR 9500 TE 110 TI 2000 slice thickness 4/0 matric 512 × 256) and high signal (arrows) on (C) fluid attenuated inversion recovery (FLAIR) (2D FLAIR IR with TR 9000 TE 130 TI 220 slice thickness 4/0 matrix 256 × 192) of an 8-year-old female with cerebral malaria (CM). The dark signal on the SWI sequence is the result of increased ferromagnetic substances associated with parasite sequestration and microhemorrhages which causes magnetic field inhomogeneity and MRI signal loss. 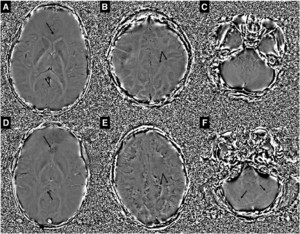