Yellow fever virus envelope protein (YFE) recombinant proteins resolved under reducing and nonreducing conditions. Analysis of purified YFE proteins on reducing (A and C) and nonreducing (B and D) sodium dodecyl sulfate polyacrylamide gel electrophoresis. Resolved proteins (1 µg) were stained with Coomassie (A and B) or probed with an antipoly-His monoclonal antibody (mAb) (C and D). The expected molecular weight (MW) for YFE-1 is 45 and 71 kDa for YFE-2E, YFE-3E, and YFE-4E. BenchMark MW markers (Thermo Fisher) are shown in the left lane 1. 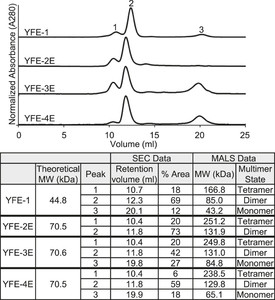 Yellow fever (YF) is a viral disease transmitted by mosquitoes and endemic mostly in South America and Africa with 20–50% fatality. All current licensed YF vaccines, including YF-Vax® (Sanofi-Pasteur, Lyon, France) and 17DD-YFV (Bio-Manguinhos, Rio de Janeiro, Brazil), are based on live attenuated virus produced in hens’ eggs and have been widely used. The YF vaccines are considered safe and highly effective. However, a recent increase in demand for YF vaccines and reports of rare cases of YF vaccine-associated fatal adverse events have provoked interest in developing a safer YF vaccine that can be easily scaled up to meet this increased global demand. To this point, we have engineered the YF virus envelope protein (YFE) and transiently expressed it in Nicotiana benthamiana as a stand-alone protein (YFE) or as fusion to the bacterial enzyme lichenase (YFE-LicKM). Immunogenicity and challenge studies in mice demonstrated that both YFE and YFE-LicKM elicited virus neutralizing (VN) antibodies and protected over 70% of mice from lethal challenge infection. Furthermore, these two YFE-based vaccine candidates induced VN antibody responses with high serum avidity in nonhuman primates and these VN antibody responses were further enhanced after challenge infection with the 17DD strain of YF virus. These results demonstrate partial protective efficacy in mice of YFE-based subunit vaccines expressed in N. benthamiana. However, their efficacy is inferior to that of the live attenuated 17DD vaccine, indicating that formulation development, such as incorporating a more suitable adjuvant, may be required for product development.