Prevalence of ocular Chlamydia infection in children aged 0–5 years in communities randomized to standard (A) or enhanced (B) coverage. All communities received biannual mass azithromycin treatment in children less than 12 years of age.

Prevalence of trachomatous inflammation in children aged 0–5 years in communities randomized to standard (A) or enhanced (B) coverage. All communities received biannual mass azithromycin treatment in children less than 12 years of age. 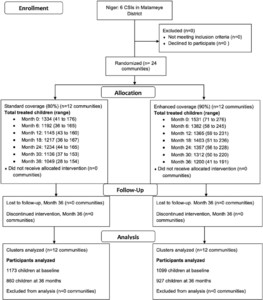 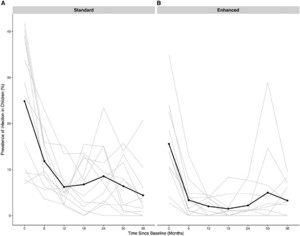 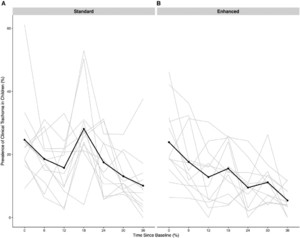 Repeated oral azithromycin distribution targeted only to children has proven effective in reducing the ocular Chlamydia that causes trachoma. Here, we assess whether an enhanced coverage target of at least 90% of children is superior to the World Health Organization recommendation of at least 80%. Twenty-four trachoma-endemic communities in Matamèye, Niger, were randomized to a single day of azithromycin distribution aiming for at least 80% coverage or up to 4 days of treatment and > 90% coverage of children under age 12. All distributions were biannual. Children < 5 years of age and adults > 15 years were monitored for ocular Chlamydia infection by polymerase chain reaction every 6 months for 36 months in children and at baseline and 36 months in adults. Ocular Chlamydia prevalence in children decreased from 24.9% (95% confidence interval [CI] 15.9–33.8%) to 4.4% (95% CI 0.6–8.2%, P < 0.001) at 36 months in the standard coverage arm and from 15.6% (95% CI 10.0–21.2%) to 3.3% (95% CI 1.0–5.5%; P < 0.001) in the enhanced coverage arm. Enhanced coverage reduced ocular Chlamydia prevalence in children more quickly over time compared with standard (P = 0.04). There was no difference between arms at 36 months in children (2.4% lower with enhanced coverage, 95% CI 7.7–12.5%; P = 0.60). No infection was detected in adults at 36 months. Increasing antibiotic coverage among children from 80% to 90% may yield only short term improvements for trachoma control programs. Targeting treatment to children alone may be sufficient for trachoma control in this setting.