An illustration of hypothetical direct and indirect impact of rotavirus vaccine on other communicable and non-communicable illnesses. Bars at either end represent the distribution of the current top six diagnosis of hospitalized and refused cases seeking care at Dhaka Shishu Hospital (DSH). Each colored bar represents a disease. The widths of the ribbons from each bar represent the proportions. The green ribbons represent the proportion of cases that were hospitalized, and the red ribbons represent those that were refused. As acute gastroenteritis care seeking decreases after vaccination, decreased competition for beds results in fewer cases of other diseases being refused (represented by narrower red ribbons on the right compared with the left). This figure is not based on a specific calculation, but is an illustration of how rotavirus vaccine can lead to direct and indirect impacts based on admission and refusal data from DSH and results of rotavirus vaccine trial and efficacy studies performed in Bangladesh. 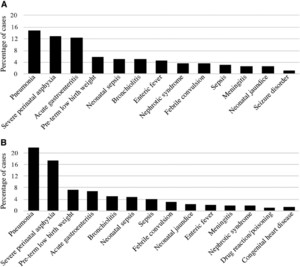 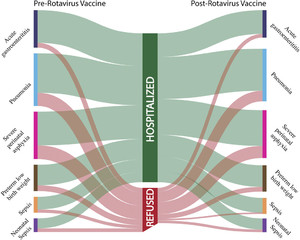 Despite the high burden of rotavirus diarrhea, uptake of rotavirus vaccines in Asia remains low. This primarily stems from a perception of rotavirus as a non-life-threatening pathogen amidst a background of competing health priorities and limited resources. In the largest pediatric hospital of Bangladesh, where there is a fierce competition for beds, we found that between November 2015 and October 2016, 12% of 23,064 admissions were due to gastrointestinal infections, 54% of which were caused by rotavirus. One in four cases requiring hospitalization, or 5,879 cases, was refused because of unavailability of beds. Most refused cases were of pneumonia (22%), severe perinatal asphyxia (17%), preterm birth complications (7%), and meningitis (2%), all of which bear high risks of death or disability, if not treated timely. When determining vaccine policies and conducting vaccine impact studies, it would be shortsighted to not consider the impact on morbidity and mortality of cases that are refused admission because of the hospitalization of children with a preventable disease as rotavirus diarrhea. In our hospital, routine use of a rotavirus vaccine with 41% efficacy will release 629 beds per year to accommodate previously refused cases. Based on evidence, we make the case that introduction of this vaccine in Bangladesh and the surrounding region will prevent morbidity and mortality, both directly and indirectly, and help us ensure survival and well-being of all children.