Composite incorporating Figure 13 of Mackerras and Sandars4 (solid bars, normal text), depicting growth of Angiostrongylus cantonensis larvae in rat brain, with superimposed pathological findings from Figure 1 in Jindrak7 (broken bars with italicized text). M3 and M4 indicate the two larval molts in the central nervous system, beyond which the sexes are readily distinguishable; adult (L5) females grow faster and longer than males. Note the closely similar timing of both subarachnoid and pulmonary stages in both sources, given that the first study actually used A. mackerrasae.

Case 1: Intact brain, cerebellum, and brainstem after formalin fixation. Note vascular congestion and patchy subarachnoid hemorrhages over cerebral convexities, with generalized broadening of gyri and narrowing of sulci. Occasional worms were present on surfaces, but not evident at this magnification. This figure appears in color at www.ajtmh.org. 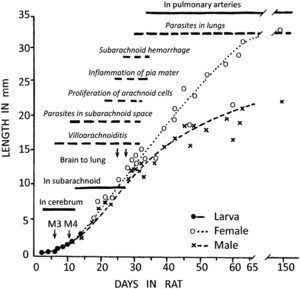 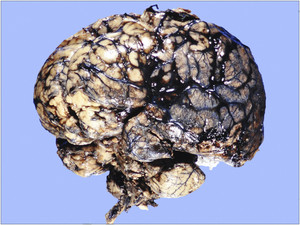 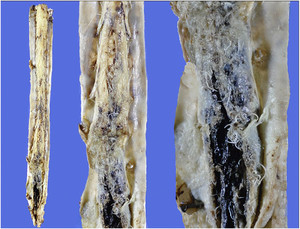 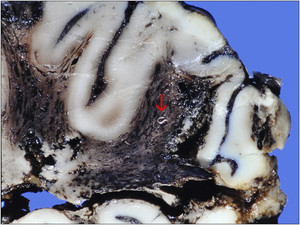 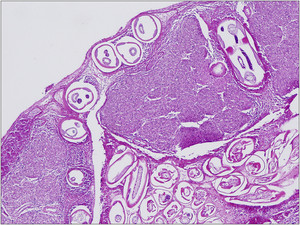 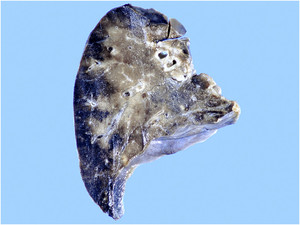 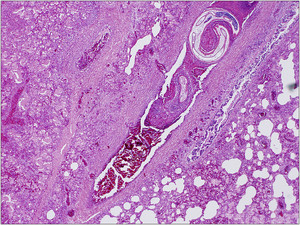 Neuroangiostrongyliasis: The “Subarachnoid Phase” and Its Implications for Anthelminthic Therapy

Infection with the Rat Lungworm Angiostrongylus cantonensis is the leading cause of human eosinophilic meningoencephalitis worldwide. From its origins in southeastern Asia, the parasite was spread extensively throughout the twentieth century and is now established in many of the world’s warmer regions. Its clinical effects range from mild and transient symptoms, usually headache with peripheral nerve dysfunction, to severe and permanent central nervous system (CNS) damage, occasionally fatal. The severity and prognosis of disease are determined by the larval dose, acquired by ingesting infected intermediate hosts (slugs and snails) or, less often, paratenic hosts, such as crabs, shrimps, frogs, and monitor lizards. Early diagnosis is critical for treatment and depends on clinical suspicion, for laboratory confirmation from blood and cerebrospinal fluid can be delayed and unreliable. Treatment is fraught with difficulty, compounded by conflicting published results. Corticosteroids play a useful role in suppressing early CNS inflammation, but their duration for maintenance becomes problematic in severe infections. Because most of the pathogenesis results from host immuno-inflammatory responses to migrating and dead larvae in the CNS, anthelminthic therapy remains controversial: if effective, it kills viable larvae, arresting them in the CNS and so exacerbating the pathology. In human infections, it is now clear that many larvae do leave the CNS and reach the pulmonary arteries, sometimes with clinical consequences. Pioneering life-cycle studies in rats demonstrated a “subarachnoid phase” in larval development and migration; recent autopsy findings, outlined here, show it also occurs in humans and has some bearing on treatment. One new and four previously reported cases of human infection are analyzed here, with findings indicating that anthelminthic treatment is effective only when given early and should not be commenced beyond 3 weeks after exposure to infection. In endemic areas, treatment should start as soon as this infection is suspected, even without a clear history of exposure, given the unacceptable risks of waiting for diagnostic laboratory confirmation.