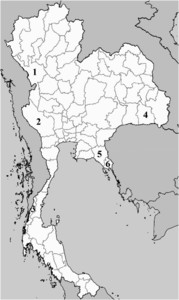 In Vitro Sensitivity of Pyronaridine in Thai Isolates of Plasmodium falciparum

Pyronaridine, a Mannich base antimalarial agent with a high activity against chloroquine-resistant Plasmodium falciparum, has been combined with artesunate as a new artemisinin based combination therapy (ACT). Pyronaridine–artesunate combination could be one of the choices for the treatment of uncomplicated falciparum malaria in multidrug-resistant areas including Thailand. The aim of this study was to determine in vitro sensitivity and cross-resistance pattern of pyronaridine in Thai isolates of P. falciparum. In addition, the influence of resistant genes concerning in vitro pyronaridine sensitivity was determined. The mean pyronaridine 50% inhibitory concentration (IC50) of 118 parasite isolates was 5.6 ± 3.1 nM (range = 0.2–15.4 nM) with a significant positive correlation with artesunate IC50 (r = 0.246, P = 0.008) and amodiaquine IC50 (r = 0.220, P = 0.042) and a significant negative correlation with quinine IC50 (r = −0.185, P = 0.047). Parasites containing the pfmdr1 86Y allele exhibited significantly reduced pyronaridine sensitivity compared with those with the pfmdr1 N86 allele (7.6 ± 3.3 nM and 5.4 ± 3.0 nM, respectively, P = 0.032, independent t test); however, the difference may not be clinically relevant. Pyronaridine–artesunate could be the candidate ACT to treat multidrug-resistant falciparum malaria in Thailand with careful monitoring.

Pyronaridine, a Mannich base antimalarial drug, was first synthesized in 1970 at the Institute of Chinese Parasitic Disease and had been used in China as a monotherapy for more than 30th years.8 Recently, pyronaridine has been developed as a fixed-dose ACT, in a 3:1 ratio, with artesunate to treat acute uncomplicated falciparum and vivax malaria.8 A few clinical studies have indicated that the efficacy of pyronaridine–artesunate was high for treating uncomplicated falciparum and vivax malaria.9–14 Pyronaridine–artesunate is well tolerated. Although transient increases in transaminases were reported in a small proportion of patients after pyronaridine–artesunate treatment, no indication of serious hepatic side effects was observed.9–14

One hundred and eighteen parasite isolates were collected from endemic areas of Thailand along the Thai–Cambodian border including Srisaket, Chanthaburi, and Trat Provinces and Thai–Myanmar border including Tak, Kanchanaburi, and Ranong Provinces (Figure 1) from 1989 to 2014. Recently adapted isolates were maintained in a continuous culture for 2–5 cycles using a method of Trager and Jensen30 before in vitro sensitivity assays. Plasmodium falciparum cultures were maintained in human O+ erythrocytes with 10% human AB serum in RPMI 1640 medium under an atmosphere of 90% N2, 5% O2, and 5% CO2. Laboratory strains used in this study comprised 3D7 and K1. The study was approved by the Ethics Committee of the Royal Thai Army Medical Department and Mahidol University-Center of Ethical Reinforcement for Human Research.

In vitro sensitivity assay of P. falciparum to pyronaridine and other antimalarial drugs, that is, choloroquine, amodiaquine, piperaquine, mefloquine, quinine, artesunate, and dihydroartemisinin, were determined by measuring [3H] hypoxanthine uptake as previously described.31 In vitro sensitivity assays of these drugs were performed at the same time. Pyronaridine, chloroquine, amodiaquine, mefloquine, quinine, and artesunate were purchased from Sigma-Aldrich® (St. Louis, MO). Piperaquine and dihydroartemisinin were gifts from Professor Stephen A. Ward, Liverpool School of Tropical Medicine, Liverpool, United Kingdom. Pyronaridine, chloroquine, amodiaquine, mefloquine, and quinine were also dissolved in 50% ethanol. Each drug was diluted in complete media to obtain final concentrations ranging from 0.1 to 25 nM for pyronaridine, 1 to 250 nM for chloroquine, 0.1 to 50 nM for amodiaquine, 1 to 200 nM for mefloquine, and 5 to 1,000 nM for quinine. Artesunate and dihydroartemisinin were dissolved in dimethyl sulfoxide and diluted in complete medium to obtain final concentrations ranging from 0.1 to 50 nM. Piperaquine was dissolved in methanol and diluted to 1 to 100 nM. For each assay, ring-stage parasite preparation containing 1% parasitemia and 2% hematocrit was incubated with different concentrations of tested drugs at 37°C for 24 hours before [3H] hypoxanthine preparation was added. The plate was then incubated at 37°C for another 24 hours before harvested. Each assay was performed in triplicate. The 50% inhibitory concentration (IC50) values were calculated using GraFit data analysis software (Erithacus Software, Kent, United Kingdom). The IC50 values of these drugs were used to determine cross-resistance patterns between pyronaridine and other antimalarial drugs.

Genotypic characterization for the pfcrt, pfmdr1, and K13 propeller genes.

Parasite DNA was extracted using the Chelex resin method32 at the same time when the in vitro sensitivity assay was performed. Polymerase chain reaction (PCR) and restriction fragment length polymorphism were used to detect pfcrt and pfmdr1 mutations. The pfcrt K76T mutation method was developed by Djimde et al.20 Genomic DNA extraction from 3D7 and K1 were used as the positive control. The pfmdr1 mutations at codons 86, 184, 1034, 1042, and 1246 were detected using the method developed by Duraisingh et al.21 Genomic DNA extraction from K1 (YYSND) and 7G8 (NFCDY) were used as the positive control. Results with a combined band pattern of undigested and digested fragments were considered mixed alleles. The pfmdr1 copy number was assessed by TaqMan real-time PCR (CFX96 Touch™; Bio-Rad, Hercules, CA) as developed by Price et al.5 The pfmdr1 and β-tubulin amplification was performed as multiplex PCR. DNA samples from 3D7 and DD2 containing 1 and 4 pfmdr1 copy numbers, respectively, were used as the reference DNA sample. All reactions were performed in triplicate. The relative measure of the concentration was analyzed by the comparative threshold cycle (Ct). The copy number was calculated using the formula 2−∆∆Ct as previously described.5 PCR sequencing for genotyping single nucleotide polymorphisms of the K13 propeller domain was performed using the method of Ariey et al.33

Data were analyzed using SPSS for Windows (SPSS Inc., Chicago, IL). Each IC50 value represented the mean of at least three independent experiments. Normal distribution of data was assessed using the Kolmogorov–Smirnov test. Correlation of in vitro sensitivities was assessed by Pearson’s correlation. Differences of the mean IC50 and copy number of the pfmdr1 among parasites from different areas were analyzed using the independent t test. Associations between pfmdr1 polymorphisms and mean IC50 were determined by the independent t test and one-way analysis of variance (ANOVA). Statistical significance level was set at P value < 0.05 for all tests.

Characterization of the pfcrt, pfmdr1, and K13 propeller genes.

The association between in vitro pyronaridine sensitivity and the pfmdr1 and K13 propeller genes.

Multidrug-resistant falciparum malaria has emerged and spread in Thailand. Artesunate–mefloquine is currently used as the first-line combination to treat uncomplicated falciparum malaria. The efficacy of artesunate–mefloquine has decreased in some regions, particularly Southeast Asia.34 New ACTs including pyronaridine–artesunate could be a candidate to replace artesunate–mefloquine. An efficacy and safety study of pyronaridine among patients with falciparum malaria was conducted in Thailand 20 years ago.35 In vitro sensitivity of pyronaridine against field isolates in Thailand was also evaluated 30 years ago.36 We determined in vitro sensitivity of recently adapted Thai isolates to pyronaridine and in vitro cross-resistance with other antimalarial as baseline information. Although another method, that is a ring-stage survival assay, has been used to characterize artemisinin resistance,37 determining the usefulness of this method for pyronaridine resistance has not been performed. In addition, we would like to compare the pyronaridine IC50 in our study with others. Our study shows an excellent activity of pyronaridine against all P. falciparum isolates from both Thai–Myanmar and Thai–Cambodian areas. This result is similar to previous studies conducted in Thailand 30 years ago and elsewhere at the present time.16,29,35,36,38–43 The clear standard cut-off point of pyronaridine is still unavailable. A related study suggested estimating using the geometric mean plus 2 SDs.16,38,43 When we used this criteria for the reduced pyronaridine sensitivity (IC50 plus 2 SDs = 11.8 nM), seven (5.9%) Thai isolates exhibited reduced sensitivity to in vitro pyronaridine (range = 12.7–15.4 nM). However, when we used a 3-fold decrease in sensitivity to pyronaridine of 3D7 (29.1 nM), no parasite isolate exhibited reduced pyronaridine sensitivity. Nevertheless, when we used a 3-fold decrease in sensitivity to pyronaridine of K1 (15.3 nM), only one isolate exhibited reduced sensitivity to pyronaridine. However, this cut-off point might not be comparable because different in vitro methods were used. In addition, the data should be considered with clinical observation of recrudescence after treating with pyronaridine. As a result from this study, pyronaridine still showed high activity against Thai isolates of P. falciparum and seemed to be equally active against isolates from both areas where the multidrug resistance has spread.

Although we did not find mixed alleles of the pfcrt and pfmdr1 gene in these parasites, multiple clones in these cultures cannot be ruled out. Thus, the phenotypes and also genotypes may represent the dominant clones. In Thailand, P. falciparum isolates from different areas contained different patterns of pfmdr1 haplotypes.48 The parasites from the Thai–Cambodian border contained the pfmdr1 184F allele with one copy number, whereas parasites collected from the Thai–Myanmar border usually contained either the pfmdr1 184Y or 184F allele with more than one copy number.48 In contrast, the parasites from the Thai–Malaysian border predominantly contained the pfmdr1 86Y allele.49 In Thailand, different antimalarial regimens were used to treat falciparum malaria in different areas according to the level of mefloquine resistance.34 Consequently, different medications might promote different patterns of the pfmdr1 haplotypes. In addition, the pfmdr1 polymorphisms in P. falciparum might be due to human migration across borders. These pfmdr1 haplotypes showed different responses to antimalarial drugs.5,6,24–28 For the partner drugs in ACT, related studies also confirmed that the mutations and amplification of the pfmdr1 gene influenced the parasite’s sensitivity to mefloquine, lumefantrine, and piperaquine.5,24–28 A significant difference of in vitro pyronaridine sensitivity was observed between the parasites containing the pfmdr1 N86 and 86Y alleles. However, the difference seemed not to be clinically significance because it was in the nanomolar range. In the Greater Mekong Subregion, treatment failure of the ACT has been observed when the parasites are resistant to the partner drug. Thus, an ACT with the effective partner drug should be chosen rationally. In the present study, no alteration of pyronaridine IC50 was observed in the parasites exhibiting the artemisinin-resistant genotype, 580Y and 539T mutations of the K13 propeller gene compared with those containing the wild type.

In conclusion, the present study determined the baseline in vitro pyronaridine sensitivity in Thai isolates of P. falciparum. The results indicated that pyronaridine is still active against P. falciparum isolates from both the Thai–Myanmar and Thai–Cambodian areas. Weak correlations with other quinolines, quinine, and amodiaquine and artesunate were found. Parasites with the pfmdr1 86Y allele showed significantly reduced pyronaridine sensitivity; however, the reduced IC50 might not be clinically relevant. The cut-off value for pyronaridine resistance or reduced pyronaridine sensitivity should be further investigated. To date, efficacy and safety of pyronaridine–artesunate was studied only in the Thai–Myanmar area. This combination should be further investigated in different areas of Thailand where parasites with different resistant genotypes exist.