Changes in vitamin A deficiency (VAD) estimates after correction for C-reactive protein (CRP) alone, or with malaria, in the low and high malaria seasons. The bars show the prevalence of VAD either unadjusted (black), adjusted for CRP alone (gray) or adjusted for both CRP and malaria (white) in the low and high malaria seasons. A = significantly from unadjusted VAD (P < 0.01); B = significantly different from VAD adjusted for CRP-alone (P < 0.01). 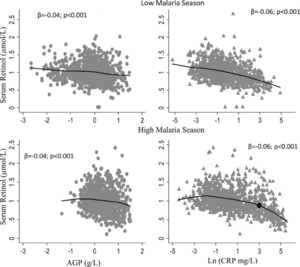 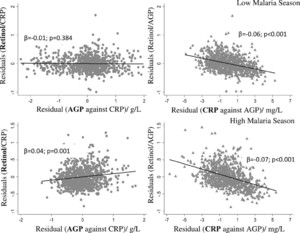 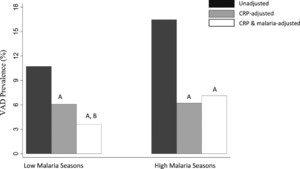 Inflammation-induced hyporetinolemia (IIH), a reduction in serum retinol (SR) during inflammation, may bias population estimates of vitamin A deficiency (VAD). The optimal adjustment for IIH depends on the type and extent of inflammation. In rural Zambian children (4–8 years, N = 886), we compared three models for defining inflammation: α-1-acid glycoprotein (AGP) only (inflammation present if > 1 g/L or normal if otherwise), C-reactive protein (CRP) only (moderate inflammation, 5–15 mg/L; high inflammation, > 15 mg/L; or normal if otherwise) and a combined model using both AGP and CRP to delineate stages of infectious episode. Models were compared with respect to 1) the variance in SR explained and 2) comparability of inflammation-adjusted VAD estimated in low and high malaria seasons. Linear regression was used to estimate the variance in SR explained by each model and in estimating the adjustment factors used in generating adjusted VAD (retinol < 0.7 μmol/L). The variance in SR explained were 2% (AGP-only), 11% (CRP-only), and 11% (AGP–CRP) in the low malaria season; and 2% (AGP-only), 15% (CRP-only), and 12% (AGP–CRP) in the high malaria season. Adjusted VAD estimates in the low and high malaria seasons differed significantly for the AGP (8.2 versus 13.1%) and combined (5.5 versus 9.1%) models but not the CRP-only model (6.1 versus 6.3%). In the multivariate regression, a decline in SR was observed with rising CRP (but not AGP), in both malaria seasons (slope = −0.06; P < 0.001). In this malaria endemic setting, CRP alone, as opposed to CRP and AGP, emerged as the most appropriate model for quantifying IIH.