Comparison of adverse events (AEs) in volunteers receiving normal saline (NS) and PfSPZ Vaccine. The percent of volunteers with a specific AE is depicted. Only a single volunteer had any individual AE after each immunization (maximum of 1/10 [10%] for NS and 1/20 [5%] for PfSPZ Vaccine). ¥, €, £, β are individual volunteers. This figure appears in color at www.ajtmh.org. 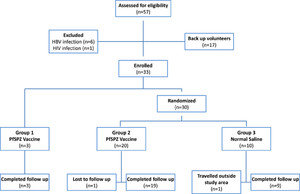 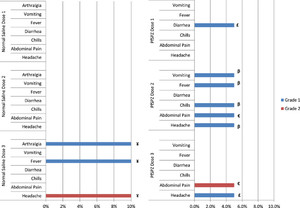 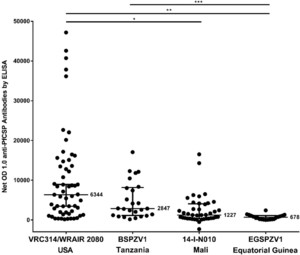 Equatorial Guinea (EG) has implemented a successful malaria control program on Bioko Island. A highly effective vaccine would be an ideal complement to this effort and could lead to halting transmission and eliminating malaria. Sanaria® PfSPZ Vaccine (Plasmodium falciparum sporozoite Vaccine) is being developed for this purpose. To begin the process of establishing the efficacy of and implementing a PfSPZ Vaccine mass vaccination program in EG, we decided to conduct a series of clinical trials of PfSPZ Vaccine on Bioko Island. Because no clinical trial had ever been conducted in EG, we first successfully established the ethical, regulatory, quality, and clinical foundation for conducting trials. We now report the safety, tolerability, and immunogenicity results of the first clinical trial in the history of the country. Thirty adult males were randomized in the ratio 2:1 to receive three doses of 2.7 × 105 PfSPZ of PfSPZ Vaccine (N = 20) or normal saline placebo (N = 10) by direct venous inoculation at 8-week intervals. The vaccine was safe and well tolerated. Seventy percent, 65%, and 45% of vaccinees developed antibodies to Plasmodium falciparum (Pf) circumsporozoite protein (PfCSP) by enzyme-linked immunosorbent assay, PfSPZ by automated immunofluorescence assay, and PfSPZ by inhibition of sporozoite invasion assay, respectively. Antibody responses were significantly lower than responses in U.S. adults who received the same dosage regimen, but not significantly different than responses in young adult Malians. Based on these results, a clinical trial enrolling 135 subjects aged 6 months to 65 years has been initiated in EG; it includes PfSPZ Vaccine and first assessment in Africa of PfSPZ-CVac. ClinicalTrials.gov identifier: NCT02418962.