(A) Mucosal lesion. (B) Granulation lesion of the glottis. This figure appears in color at www.ajtmh.org.

(A) (×400) Hematoxylin and eosin stain shows necrosis (left bottom) and chronic inflammation. Many teardrop-shaped yeasts are seen in histiocytes and in the necrotic area. (B) (×400) Periodic acid-Schiff stain enhances the yeasts. This figure appears in color at www.ajtmh.org. 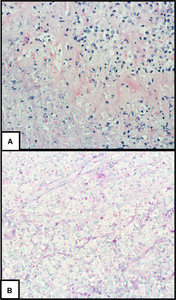 We present an autochthonous Histoplasma infection in Israel. The patient presented with hoarseness and weight loss. Pathology findings and molecular tests confirmed the diagnosis, and the patient responded to antifungal therapy. Because the patient had an atypical presentation of histoplasmosis, it is likely that other more typical cases have gone unreported. To our knowledge, no other cases have been previously reported from Israel or the Middle East region.