Map showing 83 villages selected for participation in the rat fall surveillance program, other “out of network” villages that also submitted carcasses and villages that submitted a Yersinia pestis-positive carcass. Inset: The program area of interest, in the West Nile region of Uganda.

Distribution of Yersinia pestis-positive and negative small mammal carcasses submitted through the rat fall surveillance program by month between July 1, 2013 and June 30, 2016. 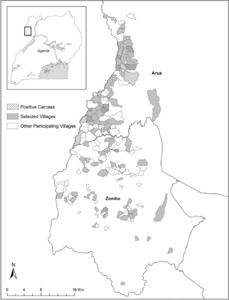 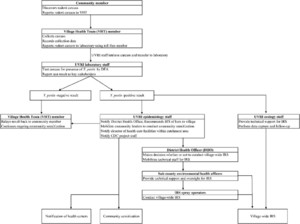 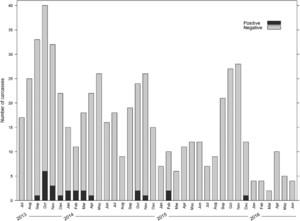 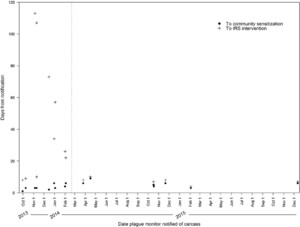 Plague, primarily a disease of rodents, is most frequently transmitted by fleas and causes potentially fatal infections in humans. In Uganda, plague is endemic to the West Nile region. Primary prevention for plague includes control of rodent hosts or flea vectors, but targeting these efforts is difficult given the sporadic nature of plague epizootics in the region and limited resource availability. Here, we present a community-based strategy to detect and report rodent deaths (rat fall), an early sign of epizootics. Laboratory testing of rodent carcasses is used to trigger primary and secondary prevention measures: indoor residual spraying (IRS) and community-based plague education, respectively. During the first 3 years of the program, individuals from 142 villages reported 580 small mammal deaths; 24 of these tested presumptive positive for Yersinia pestis by fluorescence microscopy. In response, for each of the 17 affected communities, village-wide IRS was conducted to control rodent-associated fleas within homes, and community sensitization was conducted to raise awareness of plague signs and prevention strategies. No additional presumptive Y. pestis-positive carcasses were detected in these villages within the 2-month expected duration of residual activity for the insecticide used in IRS. Despite comparatively high historic case counts, no human plague cases were reported from villages participating in the surveillance program; five cases were reported from elsewhere in the districts. We evaluate community participation and timeliness of response, report the frequency of human plague cases in participating and surrounding villages, and evaluate whether a program such as this could provide a sustainable model for plague prevention in endemic areas.