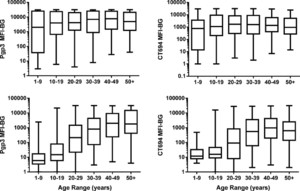 The target end date for the global elimination of trachoma as a public health problem is 2020. As countries begin the process for submitting their dossier for the validation of elimination of trachoma as a public health problem, strategies for post-validation surveillance must be considered. Seroprevalence of antibodies against antigens from the causative bacteria Chlamydia trachomatis (Ct) in young children has been shown to reflect trachomatous inflammation–follicular (TF) rates in both endemic and previously endemic settings. However, none of these studies has directly compared age seroprevalence in the same communities before and after mass drug administration (MDA) for trachoma. Here we report a marked shift in age seroprevalence curves in four villages in Kapilvastu District, Nepal, before and after MDA. Clinical examinations were performed and blood was taken before (N = 659) and 5 years after (N = 646) MDA. Rates of TF decreased from 17.6% in ≤ 9-year-olds before MDA (N = 52) to 0% in ≤ 9-year-olds (N = 73) after MDA. Positive antibody responses to Ct in the entire population decreased from 82.1% pre-MDA to 35.8% post-MDA, whereas those among ≤ 9-year-olds decreased from 59.6% to 4.1%. These data show that the postintervention decrease in TF was reflected in a drop in anti-Ct antibody responses, suggesting that antibody responses could be useful indicators for post-validation surveillance.