Time line of disease in Patient 1 treated with “Milwaukee protocol.” 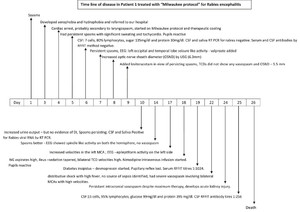 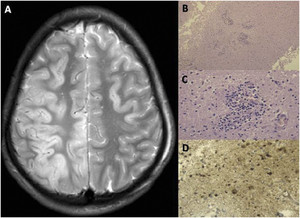 Rabies encephalitis is a fulminant, almost universally fatal infection involving the central nervous system. A unique treatment protocol, including anti-exicitotoxic therapy and induced coma was credited with the survival of a vaccinated teenager with bat rabies encephalitis in 2005. However, multiple efforts to replicate this expensive and intense protocol have not been successful. In this article, we report the failure of the protocol in Indian patients with canine-acquired rabies and elucidate the potential explanations for the failure of the protocol in our patients.

Rabies encephalitis has the highest fatality rate among infectious diseases. Most of the estimated 61,000 annual global human deaths occur in Asia and Africa.1 Canine rabies is endemic in these areas unlike the developed countries where the disease is caused by wildlife vectors such as bats. Transmission of rabies via donor organ and vascular conduit transplantation is also recognized.2 Typically, the disease runs a fulminant course resulting in death within a week. Despite the high fatality, there is paucity of prominent neural inflammation and apoptosis in patients with rabies.3 The exact neuronal mechanisms that mediate death in rabies encephalitis remain unclear. A unique treatment protocol including therapeutic coma was credited with the survival of an unvaccinated teenager in 2005.4 The so-called “Milwaukee protocol” includes anti-excitotoxic and antiviral strategies while the patient is maintained in deep coma. Ability of the natural host immune response to clear the rabies virus if the patient is supported through the intense excitotoxic phase is the basic premise of this strategy.4 We report the clinical and radiological findings and outcomes of three patients treated for canine-acquired rabies encephalitis using similar protocol in our tertiary care hospital in South India.

A 17-year-old medical student was admitted with 3 days history of hydrophobia and aerophobia with no known history of dog bite in 2015. Detection of rabies viral RNA in saliva and cerebrospinal fluid (CSF) by real time polymerase chain reaction (PCR) confirmed rabies encephalitis. The family opted for experimental Milwaukee protocol. Therapeutic coma was induced with 1 mg/kg of ketamine and 2 mg/kg of midazolam intravenously. He continued to have spasms on the ventilator and hence sodium valproate was also added. The electroencephalogram (EEG) and transcranial dopplers were recorded on alternate days. By day 19, he lost his pupillary reflexes. This was also associated with high nasogastric aspirates, and the EEG persistently showed slow wave disturbance from both cerebral hemispheres. He developed significant cerebral vasospasm, which partially responded to nimodipine. He also developed diabetes insipidus which was corrected aggressively with desmopressin. On the 20th day, he developed hypotension, requiring multiple inotropes with warm peripheries. He continued to worsen and lost all brain stem reflexes and had absent flow in the cerebral vessels using transcranial dopplers. He succumbed to the illness on the 23rd day on the protocol. Figure 1 charts the course of his illness. Rabies virus nucleocapsid neutralizing antibodies in his CSF sample obtained four times during his course of illness increased from < 16 (day 3 of hospital stay) to 256 (day 22 of hospital stay). At autopsy, his brain showed paucity of inflammatory cell infiltrate within the brain but diffuse strong staining for rabies nucleocapsid antigen (Figure 2).

A 32-year-old man belonging to a tribal community reported an unprovoked dog bite in the left hand 3 months before presentation. He received tetanus toxoid injection and local wound cleansing without any antirabies vaccine or immunoglobulin in a local health center. He presented with tingling of the upper limbs followed by aerophobia and hydrophobia for 2 days in 2011. He was intubated in the emergency department in view of the low sensorium. After careful discussion with the family regarding the prognosis and the experimental nature of the Milwaukee protocol, he was initiated on ketamine (2 mg/kg/hour intravenous infusion), midazolam (2 mg/hour infusion), ribavirin, and amantadine. Alternate-day EEG monitoring revealed no abnormal discharges with no burst suppression. His CSF was positive for rabies viral RNA by real-time PCR on day 5. His CSF antibodies remained negative. On day 6, he developed ribavirin-induced hemolytic anemia, and he was given whole blood transfusions. After 7 days, ketamine and diazepam were gradually tapered. By day 10, he developed high nasogastric aspirates, absent bowel sounds, hypotension, and warm peripheries. By day 12, he developed asymmetric pupils and lost dolls eye movements. Transcranial Doppler ultrasonography showed normal flow in the intracranial vessels and no evidence of vasospasm. He developed refractory hypotension and died on day 14.

A 23-year-old college student presented with neck pain and shoulder stiffness with anxiety and insomnia for 2 days in 2014. This was followed by difficulty in drinking water and swallowing food for 1 day. He had sustained an unprovoked bite on the left hand while playing with a puppy 4 months before. He did not receive any postexposure rabies prophylaxis. After discussion with the family, he was started on therapeutic coma with ketamine (2 mg/kg/hour infusion) and diazepam (20 mg/kg via nasogastric tube), along with amantadine, vitamin C, nimodipine, and fludrocortisone. Rabies viral RNA was detected in his saliva and nuchal skin biopsy by real-time PCR. Regular transcranial Doppler monitoring did not reveal any evidence of vasospasm. He had severe autonomic dysfunction in the form of fever, heart rate variability, and alternating hypertension and hypotension. On day 8, the doses of diazepam and ketamine were tapered. His CSF and serum neutralizing antirabies virus titers remained negative. On the 11th day of hospital stay, he developed ventricular fibrillation and succumbed to the disease.

Therapeutic coma with anti-excitotoxic therapy was ineffective in our patients with rabies encephalitis. All three of our patients received N-methyl-D-aspartate–receptor antagonism with ketamine and amantadine and γ-aminobutyric acid–receptor agonism with benzodiazepines to decrease the neuronal excitotoxicity and autonomic reactivity.4 The first patient developed significant CSF titers of rabies-neutralizing antibodies. However, when he succumbed to the illness, the brain biopsy did not reveal clearance of rabies virus. The reason for the persistence of rabies virus in the presence of high titers of antibodies questions the basic premises in which the protocol is built. The other two patients never developed CSF or significant serum antibody titers even 10 days into the clinical illness. None of the three patients had evidence of persistence of spasms or seizures on EEG monitoring. The above findings appear to suggest a more complex pathophysiology involved in rabies than the neuronal excitotoxicity and capability of normal host immune response to clear the virus.

In contrast to the index patient, efforts to replicate the “Milwaukee protocol” have generally been unsuccessful.5–9 This has been documented before both in bat- and canine-acquired rabies. Prolonged survival documented in rabies patients on the protocol likely reflects the effect of good intensive care and supportive treatment rather than the protocol itself.

Although natural virus-specific immunity is capable of clearing the virus from the central nervous system (CNS), the virus mitigates the immune response in several ways. Firstly, the virus induces immune hyporesponses, T-cell hypofunction, T-cell proliferation defects, and inhibition of type I interferon release within the CNS.10,11 Secondly, although the brain is infiltrated by rabies virions, the blood–brain barrier remains tightly closed during the initial phases of the illness.12 This effectively prevents the immune effector cells and rabies-specific neutralizing antibodies to enter the CNS space. Hence, the CNS becomes an “immune-protected space,” enabling continued replication of the virus. Thirdly, the CNS replication of the wild-type rabies virus is far less compared with culture-derived attenuated virus.13 Although it appears counterintuitive, this enables the virus to effectively evade immune cells, preserve neuronal structural integrity, and enable further spread. Hence, viral replication inhibition and blood–brain barrier manipulation appear to be the potential approaches for treatment in rabies. In addition, neuronal excitotoxicity, a basic premise on which the protocol is built, has not been proven in experimental models.14 The survival of the unvaccinated teenager is likely due to a less-virulent variant of the virus or a unique host genetic polymorphism than the effectiveness of the protocol itself.

Ribavirin and interferon-α are antivirals which have been used in the treatment of rabies but are limited by poor efficacy, toxicity, and inadequate penetration into the CNS. Favipiravir (T-705), a broad-spectrum viral RNA polymerase inhibitor currently shown to be efficacious as a prophylaxis and oligonucleotide-based antiviral therapeutics appear to be promising for the treatment of rabies.15,16 Although there are promising strategies in the horizon, there exists a moral dilemma in deciding which patients should be supported with intensive care in a developing country where the facilities are already scarce. Patients with canine rabies encephalitis tend to have a poor neurological recovery even if they survive as illustrated in the survivors from India elsewhere.17

In unvaccinated individuals with canine rabies, it appears reasonable to withhold intensive treatment once the diagnosis is established. In partially vaccinated individuals with canine rabies, if intensive treatment is attempted, the family needs to understand that even if the patient survives, severe neurological sequelae are usually the rule. If the patient survives the initial few weeks, serum and CSF antibody titers should be closely monitored. If there are no CSF antibodies in the first few weeks, the probability of survival is less and treatment with palliative intent needs to be considered.

Despite repeated attempts to treat rabies encephalitis, there is a lack of easily applicable palliative care protocol for rabies patients, which could be used in a developing country. Tarantola et al.18 recently published detailed suggestions on palliative treatment of rabies which could be used in a resource-limited setting. The authors explain palliative treatment of various symptoms of rabies, dosages of drugs, alternative routes of delivery, and also address nursing care concerns. Such protocols are of immense value in reducing suffering in this fatal disease.

In conclusion, attempts to replicate the “Milwaukee protocol” for the treatment of rabies have not been successful. Newer strategies, including blood–brain barrier manipulation and novel antivirals are urgently needed to improve outcomes in this neglected tropical disease. Until then, good intensive care with supportive measures may help the occasional patient with rabies encephalitis to survive.