Map of Kampala, Uganda, displaying influenza cases identified at five sentinel sites from 2009 to 2015. This figure appears in color at www.ajtmh.org. 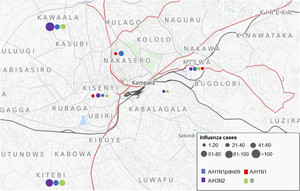 In sub-Saharan Africa, little is known about the epidemiology of pandemic-prone influenza viruses in urban settings. Using data from a prospective sentinel surveillance network, we characterized the emergence, epidemiology, and transmission dynamics of 2009 pandemic A/H1N1 influenza (H1N1pdm09) in Kampala, Uganda. After virus introduction via international air travel from England in June 2009, we estimated the basic reproductive number in Kampala to be 1.06–1.13, corresponding to attack rates of 12–22%. We subsequently identified 613 cases of influenza in Kampala from 2009 to 2015, of which 191 (31.2%) were infected with H1N1pdm09. Patients infected with H1N1pdm09 were more likely to be older adult (ages 35–64) males with illness onset during rainy season months. Urban settings in sub-Saharan Africa are vulnerable to importation and intense transmission of pandemic-prone influenza viruses. Enhanced surveillance and influenza pandemic preparedness in these settings is needed.

After its emergence in Mexico City in March 2009, pandemic A/H1N1 influenza virus (H1N1pdm09) quickly spread to major cities worldwide.1,2 Although sub-Saharan Africa accounted for a substantial proportion of global mortality during the pandemic, little remains known about the epidemiology and transmission of H1N1pdm09 in urban settings in the region.2,3 In these settings, high population density and increased amounts of shared space are likely conducive to influenza transmission, whereas surveillance and control measures are concomitantly challenged.2,4

Similar to the remainder of sub-Saharan Africa, Uganda has experienced rapid urbanization over the past 40 years, with the urban population at 15–20%.5 In the event of a recurrent influenza pandemic, continued growth and increasing density of nonimmune urban populations represents a significant challenge to containment and mitigation.6 Here, we characterize the emergence, epidemiology, and transmission dynamics of H1N1pdm09 in Kampala, Uganda, from 2009 to 2015.

Kampala is the largest city in Uganda with a population of approximately 1.5 million and a population density of 7,900 persons/km2.5 Nearly 60% of Kampala’s population resides in slums or informal communities, where population density reaches 20,000–30,000 persons/km2.5 From 2009 to 2015, prospective surveillance for influenza was conducted by the Uganda Virus Research Institute (UVRI) among patients with influenza-like illness (ILI) and severe acute respiratory infection (SARI) identified at five health facilities in Kampala. During the 2009–2010 pandemic period, screening was also conducted at Entebbe International Airport, from where disembarking travelers with suspected ILI and SARI were referred to sentinel site health facilities. The full UVRI protocol for SARI and ILI case definition, identification, and enrollment has been published.4,7 At each facility, clinicians collected clinical and demographic data and naso- and/or oropharyngeal swab samples from ILI and SARI cases. Samples were tested at UVRI by real-time reverse transcription polymerase chain reaction using primers provided by U.S. Centers for Disease Control and Prevention. For influenza A–positive samples, subtyping was done for seasonal A/H1, A/H3, A/H5, and H1N1pdm09.

To identify risk factors for infection with H1Npdm09, we compared demographic and clinical characteristics of patients infected with H1N1pdm09 to those infected with other influenza types and subtypes. Fischer’s exact or χ2 tests were used to compare categorical variables, and medians were compared using the Mann–Whitney U test. Univariate analysis and multivariate logistic regression models were used to calculate odds ratios and 95% confidence intervals. Variables were included in the multivariate model if their corresponding P value in the univariate analysis was ≤ 0.10.

We also estimated the basic reproductive number (R0, i.e., the average number of secondary cases arising from one primary case in an entirely susceptible population) for H1N1pdm09 in Kampala. To estimate R0, we aggregated incidence into monthly intervals, and fitted a linear function to the logarithm of cumulative incidence over the first 4 months of the pandemic (i.e., June–September 2009). R0 was calculated per the formula: where r is the slope of the aforementioned linear fit, and D is the infectious period for influenza.8 Based on the calculated R0, we then estimated the attack rate by solving the equation where z is the final attack rate.9

In the context of routine surveillance, verbal consent was obtained from patients ≥ 18 years and from parents or legal guardians for patients < 18 years. The study was approved by institutional review boards at UVRI, the Uganda National Council for Science and Technology, and Columbia University.

The first case of H1N1pdm09 in Uganda was identified on June 30, 2009 in a 40-year-old businessman returning to Kampala from England where he had developed ILI on June 29th. Upon arrival to Entebbe International Airport on June 30th, the patient was identified through screening procedures and was transferred to a sentinel site facility. Three sequential nasopharyngeal swabs were all positive for H1N1pdm09.

After introduction into Kampala, H1N1pdm09 rapidly became the dominant circulating subtype in the city. The epidemic peaked in October 2009 with the majority of cases observed in older children and young adults (Figure 1, Supplemental data Supplemental Figure 1). During the remainder of the 2009–2015 surveillance period, clinicians identified 613 cases of influenza, of which 191 (31.2%) were infected with H1N1pdm09 (Figure 2).

In this study, we identified the introduction of H1N1pdm09 in Uganda via international air travel and characterized the epidemiology and transmission dynamics of the virus in Uganda’s largest city. Although international outbreaks of Ebola, Zika, and Chikungunya virus have highlighted the emergence of high-priority pathogens out of sub-Saharan Africa, our findings emphasize the equal importance of pandemic-prone virus introduction into the region. Our data further suggest that the transmission potential of H1N1pdm09 in Kampala was comparable to that reported from other large cities.

We identified the introduction of H1N1pdm09 into Uganda among a traveler returning to Uganda from England.1 Historically, limited attention has been paid to importation of emerging pathogens into sub-Saharan Africa. However, Asian lineage Zika virus was imported to Cape Verde in 2016, and drug-resistant Plasmodium falciparum and Salmonella typhi species were introduced to the region from Asia nearly two decades ago.10–12 Evidence also suggests that 1918 H1N1 virus was introduced into sub-Saharan African seaports from Europe and Asia, with similar importation trends likely responsible for the 1957 H2N2 and 1968 H3N2 pandemics.13

We calculated the R0 of H1N1pdm09 in Kampala to be 1.06–1.13. Although slightly below the median R0 reported for H1N1pdm09 globally (1.46), our results are comparable to R0 reported from other urban settings (range 1.1–2.8).14,15 Urban influenza transmission in sub-Saharan Africa poses a considerable global health challenge. Together with a high-risk environment for human-to-human transmission, live poultry markets are common and may facilitate zoonotic introduction of novel influenza viruses into concentrated populations. Surveillance and control measures may also be challenged in crowded schools and slums.2,4,6

The high incidence of H1N1pdm09 in 2009 most likely saturated the herd immunity in Kampala, with few H1N1pdm09 cases observed from 2010 to 2013. However, after 3 years of accumulating naive hosts, a recurrent epidemic of H1N1pdm09 occurred again in 2014, mainly in young children. Consistent with a prior analysis, this supports the slower drift rate of H1N1 viruses and its dependence on new naive hosts.16 Seasonally, H1N1pdm09 incidence peaked during the rainy seasons, and patients infected with H1N1pdm09 were more likely to have illness onset during these time periods. Studies from the tropics have demonstrated increased influenza incidence during rainy seasons, potentially due to a relationship between virus survival, humidity, and precipitation.17,18 Given implications for vaccine deployment, future investigations are needed to better characterize these environmental transmission dynamics.

Although influenza incidence is typically concentrated among infants and young children, we observed a high frequency of H1N1pdm09 infection among older children and young adults during the early pandemic period in 2009. Patients infected with H1N1pdm09 were also more likely to be older adults. Data from South Africa suggest that this age group may be at higher risk for severe outcomes from influenza, likely due to a higher burden of human immunodeficiency virus (HIV) infection.19

Our study had limitations. Sentinel surveillance programs are reflective of their catchment populations, and our findings are limited to data collected at five facilities. For our estimates of R0, we chose to target the early pandemic period, potentially limiting the power of our estimates. Finally, our epidemiologic analyses were limited to data captured by the UVRI surveillance program, and we lacked detailed clinical data such as HIV infection status.

Urban settings in sub-Saharan Africa are vulnerable to importation and intense transmission of pandemic influenza viruses. Further elucidation of the epidemiology and transmission dynamics of influenza in these settings is needed to enhance containment and mitigation strategies for these unique environments.