Flow diagram of this retrospective study.

The Kaplan–Meier curves of laboratory-confirmed Ebola virus disease in adult and elderly patients in Guinea. The Cox regression test yielded a χ2 value of 20.82 at 3 degree of freedom (P < 0.001). This figure appears in color at www.ajtmh.org. 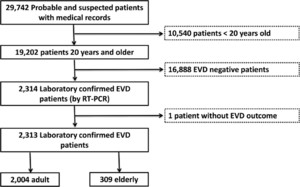 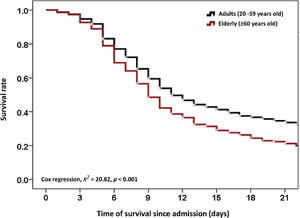 Elderly people occupy a prominent position in African societies; however, their potential linkage to high case fatality rate (CFR) in Ebola virus disease (EVD) was often overlooked. We describe the predictive factors for EVD lethality in the elderly. A total of 2,004 adults and 309 elderly patients with confirmed EVD were included in the analysis. The median age (interquartile range) was 35 years (23–44) in adults and 65 years (60–70) in the elderly. The proportion of funeral participation was significantly higher in the elderly group than in the adult group. Duration (in days) between the onset of symptoms and admission was significantly longer in elderly. CFR in the elderly people was also significantly higher (80.6%) than in the adult group (66.2%). Funeral participation constituted a risk factor for the transmission of EVD in elderly people.