Map of PNG with study provinces. The collection locations are indicated as dots. The pie charts indicate the distribution (%) and number (n) of mosquitoes subjected to the bioassays in each region. AF = Anopheles farauti; AK = An. koliensis; AL = An. longirostris; AP = An. punctulatus. This figure appears in color at www.ajtmh.org.

Proportion of active mosquitoes during 60 minutes of exposure to dichlorodiphenyltrichloroethane (A), deltamethrin (B), lambda-cyhalothrin (C). Dotted lines are the 95% confidence intervals (CI) of the fit curves. Error bars denote the 95% CI of the measured values. This figure appears in color at www.ajtmh.org. 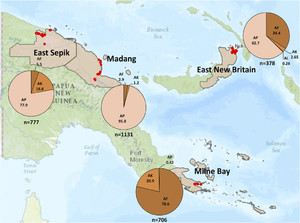 Status of Insecticide Resistance in Papua New Guinea: An Update from Nation-Wide Monitoring of Anopheles Mosquitoes

Insecticide resistance (IR) monitoring is an important component of vector-borne disease control. The last assessment of IR in Papua New Guinea (PNG) was conducted in 2010. Since then, vector populations have been exposed to higher levels of pyrethroids with the continued nation-wide distribution of insecticide-treated nets. Here, we provide an update on phenotypic IR in four highly malaria-endemic areas of PNG. IR against deltamethrin, lambda-cyhalothrin, and dichlorodiphenyltrichloroethane was assessed using World Health Organization bioassays. A total of 108 bioassays for each insecticide were conducted screening 2,290 adult female anopheline mosquitoes. No phenotypic resistance was observed. Bioassay parameters agreed well with those observed in other studies that used the same assays and insecticides. These results indicate that the three tested insecticides are still universally effective in PNG. Continued IR monitoring (every 1–2 years) in PNG is recommended to detect reduced susceptibility early and adjust guidelines to prevent widespread resistance.

The use of pyrethroid insecticides has increased in Papua New Guinea (PNG) primarily over the last decade as a result of free nationwide distribution of deltamethrin-treated long-lasting insecticidal nets (LLINs).1 Alongside case management using rapid diagnostic tests and artemisinin-based combination therapy, LLINs are the primary malaria control strategy implemented in PNG. LLINs have significantly contributed to the declining malaria burden in the country.2,3

Insecticide resistance (IR) has arisen in anopheline populations in other malaria-endemic nations, particularly in Africa and Asia, after the distribution of pyrethroid-treated LLINs and the use of pyrethroids for indoor residual spraying (IRS), agriculture, and household use in repellents and aerosol sprays.4,5 Till date, pyrethroid resistance has not been documented in PNG. In a 2010 study, mosquito populations from Madang, East Sepik, and Manus provinces in PNG were screened for phenotypic resistance using bioassays.6,7 The study found all sampled mosquitoes to be fully susceptible. A reassessment of the situation is overdue, especially considering that the continued nation-wide rollout of LLINs has the potential to exert a strong selection pressure on local mosquito populations. Some evidence for mosquito selection attributable to LLINs in PNG has recently been published showing a shift in the peak biting times of Anopheles farauti from later to earlier in the evening, presumably as a consequence of people being protected by LLINs during the usual peak biting hours.8 Further analyses of related data suggested that as a consequence of this adaptation, personal protection provided by LLINs decreased over time being lowest in the adult population, who may be an important reservoir for the transmission.9

The study was conducted on Anopheles populations in four provinces of PNG (Madang, Milne Bay, East Sepik, and East New Britain) and used IR bioassays based on a World Health Organization (WHO)-recommended methodology. It thus closely resembles the last monitoring study from 2010.7 The reason for choosing these areas was mainly their history of insecticide use for vector control with LLINs and previous IRS efforts.10 Within each province, Anopheles mosquito larvae were collected in a number of separate locations (Figure 1). Collections were conducted between December 2015 and June 2016 for 7 days in each region. Global positioning system (GPS) coordinates were recorded for each collection location using a GPS tracker (Garmin, USA). We also included the measurement on our known susceptible A. farauti colony.

Three insecticides were selected for the testing: 1) deltamethrin, which is the pyrethroid insecticide used on LLINs distributed in PNG; 2) lambda-cyhalothrin, another pyrethroid insecticide used for IRS in some areas of the country, in particular East New Britain; and 3) dichlorodiphenyltrichloroethane (DDT), an organochloride insecticide widely used in historical malaria control programs that have been shown to elicit cross-resistance to pyrethroids.11 The present study was aimed at confirming mosquito susceptibility against these common insecticides in phenotypic bioassays. A diverse range of breeding sites was screened for mosquito larvae, to maximize diversity and thus increase the probability to detect IR, if present. Breeding sites harboring Anopheles larvae included 1) river/stream banks where flow is reduced; 2) permanent ponds with vegetation; 3) permanent wells and irrigation systems; 4) small and temporary water bodies, rainfall-related (tire tracks, puddles, and drains); 5) blocked stream mouths with stagnant water; and 6) flooded cow paddocks and pig pens, among others.

Larvae were transported to a nearby insectary if available (e.g., in Madang) or a temporary field insectary setup for rearing mosquitoes and conducting the bioassays. Larvae were placed in trays (approx. 20 × 30 × 15 cm) containing approximately 400 mL of creek water and fed with tropical fish food until pupae developed. The pupae were collected into plastic cups using a Pasteur pipette. The cups were placed into plastic mosquito containers with a permeable net on the top. Cotton wool soaked with a 10% (w/v) sugar solution was placed on top of the net for adult mosquitoes to feed. The containers were covered with a moist towel to maintain adequate humidity. Mosquitoes hatched from the pupae were allowed to age 2–5 days until they were used in the bioassays. Anopheline species were determined by morphological characterization at the field site. Mosquitoes were subjected to the bioassays by site, rather than by species. Mosquito numbers and species subjected to the bioassays are shown in Figure 1.

The insecticide susceptibility bioassay applied in this study was developed by the WHO and has been previously described.12 The test is widely used across the world, and has the advantage of being standardized, allowing for meaningful comparisons between studies. Bioassays were conducted in standard tubes using 20–30 adult female mosquitoes (aged 2–5 days). To account for the variability caused, for example, by mosquito age and physiological status, at least four replicate tests and two controls were conducted per site.

Female mosquitoes were exposed in test tubes containing standard filter papers treated with the discriminating insecticide concentrations conferring to a 99.9% death rate in susceptible mosquitoes over 60 minutes (0.05% deltamethrin, 0.05% lambda-cyhalothrin, and 4% DDT, respectively).11 The number of knocked down mosquitoes was counted in time intervals of 5 minutes until 60 minutes had elapsed. The mosquitoes were then transferred back to an insecticide-free paper cup and allowed to recover for 24 hours with sugar solution provided.

To assess mosquito response to the three insecticides, three key parameters were calculated:

Table 1 summarizes the findings for each province and each insecticide. Where applicable, values are given as mean (95% confidence intervals [CI]).

Summary of the phenotypic bioassay results stratified by insecticide and region

DDT = dichlorodiphenyltrichloroethane. Values are given as mean (95% confidence intervals).

Overall, the times to achieve 50% mosquito knockdown were ∼10 minutes for deltamethrin, ∼15 minutes for lambda-cyhalothrin, and ∼38 minutes for DDT (exact data given in Table 1). The knockdown rate for DDT after 60 minutes of exposure was 87% (95% CI: 83–91%), whereas it was 100% for the two other tested insecticides. These results are in line with studies from other countries (e.g., an African study where DDT also showed significantly longer knockdown values in susceptible populations as compared with deltamethrin and lambda-cyhalothrin13) and suggest that overall, the tested mosquito populations in the present study were phenotypically fully susceptible to the three tested insecticides.

Figure 2 shows the mosquito knock-down curves stratified by study site and insecticide. There were no statistically significant differences between study sites in the relevant IR indicators i.e., 60 minutes knockdown proportion and the proportion of mosquitoes that were dead 24 hours after the 60-minute exposure (Table 1, t test to assess for differences in proportions, Bonferroni correction for multiple hypothesis testing). This suggests that the susceptibility to the tested insecticides in PNG is still universal, and there is no indication that resistance has started to develop in certain provinces but not in others. The 50% knockdown times were more variable, and some statistical differences between provinces were apparent (Supplemental Table 2). The largest difference in 50% knockdown time was observed for deltamethrin in the East Sepik Province, as compared with all other provinces (5–9 minutes difference in 50% knock down time).

The 50% knockdown time is not a standard IR indicator; however, noting these differences is interesting and further studies should be conducted regarding its usefulness as an IR indicator.

No phenotypic IR was identified in the present study across four provinces of PNG. The results indicate that the mosquitoes tested were fully susceptible to all three tested insecticides. Although this is promising, it cannot be concluded that IR may not have arisen in other parts of PNG or may not arise in the near future, especially with the continued large-scale distribution of insecticide-treated nets. The observation that 50% knockdown times in the East Sepik Province (the province with the longest widespread LLIN use in PNG) were significantly longer than in all other provinces and one mosquito (An. punctulatus) survived the 24-hour period after exposure to deltamethrin warrants continued careful monitoring. IR is already posing a serious challenge to malaria control programs in other parts of the world. Continued regular monitoring of IR is therefore warranted within the frame of routine activities of the PNG National Malaria Control Program, which may be achieved through the establishment of entomological sentinel sites across the country. Full use should be made of relevant in-country capacities, including the expertise and resources available at the Papua New Guinea Institute of Medical Research and at the Malaria Surveillance and Control Unit (MSCU).14 DDT resistance monitoring is useful as it elicits cross-resistance with pyrethroid insecticides. However, as DDT has not been used in PNG for several decades, it is suggested that monitoring for DDT resistance is replaced by monitoring for other pyrethroids such as permethrin.