Sex ratios in visceral leishmaniasis (VL) cases reported to the state of Rio Grande do Norte, Brazil. Reported cases of VL to the Ministry of Health of the state of Rio Grande do Norte, an endemic region of Leishmania infantum infection. (A) Percentage of male and female patients. (B) Distribution of patients by age and sex. N = 1,967. For statistical comparisons, all other age groups were compared with the 2–5 years old category. The overall significance level for these data is P < 0.0001, using a χ2 test of contingency for the overall table and χ2 test for each age group vs. the overall gender distribution. 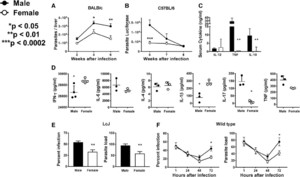 Leishmania infantum causes visceral leishmaniasis (VL) in Brazil. We previously observed that VL is more common in males than females living in endemic neighborhoods, despite similar exposure. Using a larger sample, we document that VL is more common in males than females, but only after puberty. BALB/c and C57BL/6 mouse models confirmed that there is a biological basis for male susceptibility to symptomatic VL, showing higher parasite burdens in males than females. Female C57BL/6 mice generated more antigen-induced cytokines associated with curative responses (interferon-γ, interleukin [IL]-1β). Males expressed higher levels of IL-10 and tumor necrosis factor, which are linked to exacerbated disease. Different parasite lines entered or survived at a higher rate in macrophages of male- than female-origin. These results suggest that males are inherently more susceptible to L. infantum than females and that mice are a valid model to study this sex-dependent difference.