Multiple confluent nodular lesions over the brownish dyschromic surface of the left tibia.

Skin biopsy. Round yeast-like organisms with a birefringent membrane among and within macrophages and multinucleated giant cells. Hematoxylin and eosin. Magnification ×63. 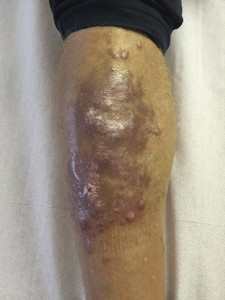 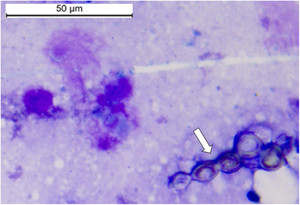 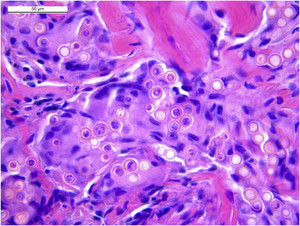 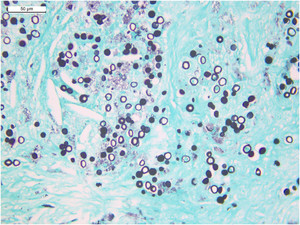 Case Report: Molecular Confirmation of Lobomycosis in an Italian Traveler Acquired in the Amazon Region of Venezuela

Lobomycosis is a chronic skin mycosis endemic in Amazon regions characterized by chronic nodular or keloidal lesions caused by Lacazia loboi, an uncultivable fungus. Imported cases in nonendemic countries are rare and diagnosed after years. We describe a case of lobomycosis in a healthy 55-year-old Italian traveler who had acquired the infection during 5-day-honeymoon in the Amazon region of Venezuela in 1999. Several weeks after return, he recalled pruritus and papular skin lesions on the left lower limb, subsequently evolving to a plaque-like lesion. Blastomycosis and cryptococcosis were hypothesized based on microscopic morphology of yeast-like bodies found in three consecutive biopsies, although fungal cultures were always negative. In 2016, exfoliative cytology and a biopsy specimen examination showed round yeast-like organisms (6–12 μm), isolated or in a chain, connected by short tubular projections fulfilling the morphologic diagnostic criteria of Lacazia spp. The microscopic diagnosis was confirmed by molecular identification.

Lobomycosis is a chronic granulomatous fungal infection of the skin and subcutaneous tissues characterized by nodular or keloid-like lesions, first described by Jorge Lobo in 1930.1

It is caused by Lacazia loboi, an uncultivable fungus classified in the group of the Onygenales order and Ajellomycetaceae family.2 Lacazia loboi is saprophytic in soil, vegetation, and water in hot and humid forest areas with large rivers. Patients, usually rural workers and fishermen, are infected through the inoculation of the fungus into the dermis after a trauma or an insect bite. Lobomycosis is also considered an emerging zoonotic mycosis as it can also occur after direct and indirect human contact with dolphins, in particular, the bottlenose dolphin, the only animals known so far to be naturally infected.3

Lobomycosis is endemic in rural areas of the Amazon basin (Brazil, Ecuador, Venezuela, Guyana, Suriname, Bolivia, Peru, and Colombia), as well as in French Guiana, Panama, Costa Rica, and Mexico where it affects indigenous people and dolphins.3 To date, about 500 human cases have been reported worldwide, 318 of them in Brazil.3,4 The occurrence of lobomycosis outside Central and South America is exceedingly rare, although autochthonous cases have been reported in Africa and Greece.5,6

Till date, only nine cases of imported lobomycosis in nonendemic countries have been described.5,7–14 In all cases, a long period elapsed between the exposure to endemic areas and the diagnosis.

Here we report a case acquired in the Amazon Region of Venezuela, 17 years earlier. The patient gave his informed consent.

In August 2016, an otherwise healthy 55-year-old Italian man presented to our clinic showing numerous infiltrative nodular lesions confluent to a large painless plaque covered by smooth and shiny skin over the brownish dyschromic surface of the left tibia, measuring 15 by 20 cm (Figure 1). No regional lymph node involvement was observed.

The lesions had been slowly growing since 1999, few weeks after his return from a 30-day honeymoon in Venezuela. The patient reported several insect bites but no skin trauma during 5-day jungle trekking in the Canaima National Park in Bolivar State, southeastern Venezuela. He had visited the waterfalls of the park, including the Angel Falls, where he also had numerous water contacts. He recalled pruritus and small papular skin lesions of the left lower limb starting several weeks after the trip and evolving into an itching plaque-like lesion. Blastomycosis and cryptococcosis were hypothesized based on microscopic morphology of yeast-like bodies found in three consecutive biopsies. However, fungal cultures were always negative. Despite a 12-month course of itraconazole and several shorter courses, an only minimal improvement was achieved.

He had no medical history of chronic diseases, and he was not taking any medications. HIV serology, cryptococcal capsular glucuronoxylomannan antigen detection, Histoplasma capsulatum and Coccidioides immitis serologies, and 1,3-beta-D glucan were negative, while Blastomyces dermatitidis serology was positive. Immunophenotyping of peripheral blood was normal. MRI of the left leg showed no pathological findings except an altered signal on subcutaneous areas.

A biopsy specimen from the lesion was obtained. Half of the collected material was submitted to cytology (Diff-quick stain), bacterial and fungal (yeasts, dimorphic fungi, and molds) culture, and molecular investigations. After DNA extraction, the ITS region was amplified using the ITS1/ITS4 primer set15 and then sequenced. Comparison of query sequences with those available from GenBank database confirmed the identification and absence of contamination (https://blast.ncbi.nlm.nih.gov). Histological examination was carried out on the remaining half biopsy. The sample was fixed in 10% neutral buffered formalin, routinely processed for histology, and the 4-μm section was stained with hematoxylin and eosin and Gomori’s methenamine silver stain.

Histologically, many round yeast-like organisms with birefringent membrane were seen among and within foamy macrophages and multinucleated giant cells. The morphology of the organisms was consistent with Lacazia spp. and a diagnosis of a granulomatous dermatitis was made (Figures 3 and 4).

Negative cultures confirmed a not-growing pathogen in vitro, and excluded mixed infection with other fungi (yeasts, molds, and dimorphic mycetes) or bacteria. Four sequences obtained from this study showed to be identical (99%) with Lacazia loboi sequence (AF322182), confirming the taxonomic identity. In addition, the phylogenetic tree constructed with representative ITS1/2 sequences of Lacazia and dimorphic fungi, showed a well-supported (bootstraps value > 95%) “Lacazia clade,” clearly separated from Blastomyces, Histoplasma, Paracoccidioides, and Coccidioides clusters (data not shown).

Itraconazole 200 mg every 12 hours was started, and the patient was referred for surgical resection considering the previous unsuccessful medical treatments.

Lobomycosis is a cutaneous and subcutaneous mycosis endemic in rainforest of the Amazon. Only 23 autochthonous cases have been reported in Venezuela.16 However, the prevalence of this mycosis is underestimated everywhere, as the access to health service in forest areas is not guaranteed, and it is not a notifiable disease.

Lobomycosis affects exposed and cooler skin areas with a localized disease after a variable (weeks to months) incubation period. The initial lesion, a papule, progresses over months to nodules covered by smooth and shiny skin that can persist for years. The painless and pruritic lesions often have a tendency to become confluent to a plaque.17 The most common presentation is the keloidal nodule, although lobomycosis is pleomorphic (scar-like, verrucoid, ulcerative), particularly during the chronic phase, making the recognition more difficult.3,4

To our knowledge, this is the first report of lobomycosis in a European traveler. Only nine imported cases have been described in industrialized countries: the United Kingdom,5 the United States,7,8,11,14 the Netherlands,9 France,10 Germany,12 and Canada.13 Five were migrants from endemic countries whereas only four were travelers from the United States,11,14 Canada,13 and South Africa5 visiting Venezuela, Brazil, and Mexico. Similarly to our patient, three of them have visited the Bolivar State of Venezuela,16 and one had walked beneath Angel Falls.11 Of the ten cases (including our patient), the mean time to diagnosis was 21 years (range, 2–56 years).

This long delay is mainly due to the difficult diagnosis that is essentially clinical and microscopic, as L. loboi is unable to grow in culture medium.

The initial differential diagnosis should include keloids, lepromatous leprosy, and verrucous cutaneous leishmaniasis, besides other, more common subcutaneous mycoses such as blastomycosis, sporotricosis, chromoblastomycosis, paraccocidiodomycosis, and African histoplasmosis caused by H. capsulatum var. duboisii even if in this case the travel history could exclude this last etiology.3,18,19

The accuracy of microscopic examination depends on the quality of the specimen and the experience of the pathologist. A consistent morphology showing typical round- or oval-shaped cells with connecting tubular projections seen at cytology and/or histology might be suggestive of Lacazia identification, particularly considering their remarkable uniformity in size and the tendency to produce chains of cells. These characteristics allow to differentiate them from other subcutaneous mycoses, such as paraccocidiodomycosis (Paracoccidioides brasiliensis rarely has thin wall 3 or 4-cell chains), blastomycosis (B. dermatitidis presents a thick wall and usually single blastoconidia, smaller than the parent cell), and African histoplasmosis (cells are uniform in size, with relatively thick walls but presenting solitary, large blastoconidia attached to the parent cell by narrow necks).18,19 In support to microscopical approaches, molecular tools using DNA characterization allow to obtain species identification.15 An additional benefit of PCR and sequencing methods is the possibility to investigate paraffined and fixed material any time fungal elements are microscopically described by the pathologist. Molecular tools may reveal particularly useful in nonendemic countries, where the diagnosis may be challenging because of possible differences in clinical presentation, and even more so to lack of experience of this specific mycosis (a reason of the almost invariable diagnostic delay, as discussed above). As the lesions of lobomycosis, particularly if large and present for years, are refractory to medical therapy, they require surgical excision, too, also to avoid squamous cell carcinoma, a rare complication of this mycosis.4 The combination of itraconazole and clofazimine for 12 months was reported to be successful in one patient.12 More recently, Woods et al.4 have reported the best outcome obtained in 10 patients treated for multibacillary leprosy with clofazimine, rifampicin, and dapsone, highlighting the necessity to develop studies aimed at the treatment of lobomycosis.

The increase of international travel may lead to an increase of imported cases of neglected mycoses in nonendemic countries. Lobomycosis should be considered in subjects with long-lasting nodular or keloidal skin lesions, who report traveling (even many years before) in the Amazon regions, or marine activities and/or dolphin contact. Molecular biology can provide a rapid and highly specific identification of L. loboi, thus making possible the effective management of patients and contributing to improve the knowledge of the epidemiology of this neglected mycosis (also possibly in areas previously considered disease-free).