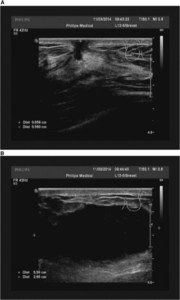 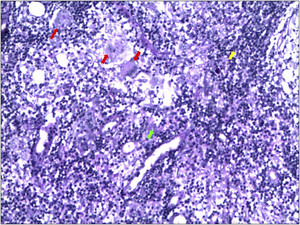 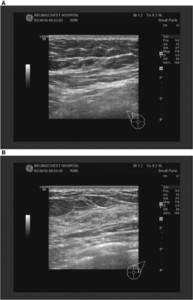 Primary breast tuberculosis is rare. We report a case of bilateral primary breast tuberculosis. The patient received incisional drainage and debridement of both breasts. Histopathology of the breast tissues revealed chronic granulomatous inflammation and positive acid-fast stain. The patient received antitubercular therapy for 18 months, and she achieved complete resolution.

Breast tuberculosis, which was first described by Sir Astley Cooper in 1892, is a rare extrapulmonary tuberculosis due to the resistance of mammary gland tissue to the survival and multiplication of Mycobacterium tuberculosis.1 It comprises approximately 0.025–0.1% of all the breast diseases treated surgically in western countries,2 and 3–4.5% of the mammary pathologies in the high tubercular endemic countries such as India.3 Breast tuberculosis has no defined clinical features, and is usually misdiagnosed as other breast disease. In China, the misdiagnosis rate is as high as 57–80%.4

A 29-year-old female, presented at hospital with redness, swelling, heat, and pain in her right breast. She had no history suggestive of past or present tuberculosis, or contact with a tuberculosis patient. She had no other significant past history, for example, breast disease, diabetes, and rheumatic disease. She produced one baby and breast-fed for 1 year, and the breast tuberculosis occurred when she weaned 2 years later. On physical examination, there was erythema in the lower outer quadrant of her right breast. Temperature of skin was raised and a 8 × 10 cm diffuse, fixed mass was felt. The opposite breast was normal. Ultrasonography of bilateral breast revealed breast abscess in the right breast and slice echo reduction in the left breast. She was diagnosed with plasma cell mastitis and treated with penicillin and levofloxacin. The patient achieved short-term relief, but the symptoms recurred 15 days later. Incisional drainage and debridement of the right breast were performed, and the tissue sent for histopathology and acid-fast bacilli (AFB) stain revealed chronic granulomatous inflammation and positive AFB stain. Cefuroxime was prescribed to prevent postoperative infection. Three months later, she reported with pain in her left breast, and a 5 × 4 cm tenacious, fixed mass was felt in the lower outer quadrant, and it was diagnosed as breast abscess. Surgical procedure and histopathology of the left breast tissue as had been performed previously in the right breast. Patient was referred to our hospital for further management. We found a sinus tract in her right breast, and an ulcer covered with thick pus was found in her left breast.

Chest computerized tomography (CT), abdominal ultrasound, cervical lymph nodes ultrasound, blood cells count, and blood chemistries were normal. Human immunodeficiency virus was negative. T-SPOT.TB test (Oxford Immunotec Global PLC, Abingdon, England) was positive. Sputum for AFB stain, culture, and polymerase chain reaction (PCR) were negative. PCR was performed according to the method described by Carniel et al.5 Breast ultrasound revealed bilateral abscess and the left was larger (Figure 1). About 20-mL thick pus was drained out from her left breast, but not from the right one. Pus was negative for AFB stain and culture. The histopathology of the left breast tissue was examined, and revealed chronic granulomatous inflammation (Figure 2), and AFB stain was negative. The antitubercular treatment (isoniazid 300 mg, rifampicin 450 mg, ethambutol 750 mg, pyrazinamide 1,500 mg per day) was initiated for 12 months and continued with isoniazid and rifampicin for an additional 6 months. At the same time, regular dressing of the wounds was also done. The patient was followed up by clinical examination and ultrasonography. She improved clinically and achieved complete resolution at the end of antitubercular therapy (Figure 3).

Breast tuberculosis is rare even in countries where pulmonary and extrapulmonary tuberculosis are endemic. Moreover, its primary form is much rarer. Breast tuberculosis usually occurs among women aged between 20- and 50-years old.3 It usually has unilateral involvement, only 3% of patients are affected bilaterally.6 Breast tuberculosis is divided into primary and secondary.7 Most occur as secondary because of a concurrent infection, and primary is diagnosed when there is no other source of M. tuberculosis infection except the breast8 (as in this case). Breast can be infected in a variety of ways, for example, lymphatic, hematogenous, spread from contiguous structures, direct inoculation, and ductal infection.9 The commonest way is via lymphatic spread.9 In the current case, there was no thoracic or axillary lymphadenopathy present via the CT chest. In 2005, Tewari and Shukla1 reclassified the breast tuberculosis into three varieties, that is, nodular, disseminated, and abscess. Breast abscess is common among young females and constitutes up to 30% of cases.1 As in this case, the patient presented with bilateral breast abscess.

The detection of M. tuberculosis by Ziehl Nissl staining or culture of the breast tissue or pus is important to diagnose breast tuberculosis. Breast tissue has better yield for AFB stain and culture than pus.10 The findings via breast ultrasound are not specific. Interferon gamma release assay cannot differentiate between latent and active M. tuberculosis infection.11 Histopathological examination remains to be the gold standard. It is critical to observe the caseous granulomas in breast tissue or involved lymph nodes. In the high tubercular endemic countries, when the granuloma is observed, antitubercular treatment should be conducted, even in the absence of M. tuberculosis culture and AFB staining.12 In this case, levofloxacin was prescribed when the patient was diagnosed with mastitis. The patient achieved short-term relief because of the antituberculosis effect of levofloxacin and delayed diagnosis. The histopathology of bilateral breasts revealed granulomatous inflammation, without caseous necrosis, and the patient responded well to treatment.

Antitubercular treatment is the mainstay treatment of breast tuberculosis. According to World Health Organization guidelines on extrapulmonary tuberculosis, the therapy regimen of breast tuberculosis is four drugs (isoniazid, rifampicin, ethambutol, and pyrazinamide) for initial two months and later continued on two drugs (isoniazid, rifampicin) for additional 4 months. The National Tuberculosis Control Program of China recommends more than 1 year antituberculosis therapy for some patients because of the incomplete resolution of the symptoms or lesions (as was presented in this patient). Surgical intervention is required for patient refractory to medical therapy.9