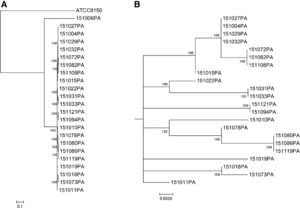 Little is known about the epidemiology of typhoid and paratyphoid fever in Nepal. We aimed to elucidate the molecular and clinical epidemiology of Salmonella Paratyphi A in Nepal. Isolates were collected from 23 cases of bacteremia due to S. Paratyphi A between December 2014 and October 2015. Thirteen patients (57%) were male, and the median age was 21 years. None of the patients had an underlying chronic disease. All S. Paratyphi A isolates were sensitive to ampicillin, trimethoprim/sulfamethoxazole, ceftriaxone, and chloramphenicol. All isolates were resistant to nalidixic acid and were categorized as intermediately susceptible to levofloxacin. Phylogenetic analysis revealed close relatedness among the isolates, including several clonal groups, suggesting local spread. Patients with bacteremia due to S. Paratyphi A in Kathmandu, Nepal, were relatively young and nondebilitated. Improving control of S. Paratyphi infections should focus on effective infection control measures and selection of empirical therapy based on current resistance patterns.

Salmonella enterica serotype Typhi or S. enterica serotype Paratyphi cause an estimated 22 million new cases of enteric fever (typhoid or paratyphoid) annually, and 200,000 deaths.1 Nepal is located in South Asia where typhoid and paratyphoid fever are most prevalent.2 Especially, Kathmandu is known to have the significant burden of enteric fever caused by S. Typhi and S. Paratyphi A.3 The recent spread of multidrug resistant S. Typhi and S. Paratyphi A is a serious threat to public health; however, little is known about the epidemiology of typhoid and paratyphoid fever in Nepal. Previous reports have suggested an increase in the incidence of paratyphoid fever, against which currently available typhoid vaccines provide little to no protection.2,3 This study aimed to elucidate the molecular and clinical epidemiology including the prevalence of drug-resistant strains and phylogenetic analyses of S. Paratyphi A in Nepal.

From December 2014 to October 2015, S. Paratyphi A isolates were collected from patients with bacteremia at Tribhuvan University, Kathmandu, Nepal. For patients from whom more than one S. Paratyphi A strain was isolated during the study period, only the first episode was analyzed (i.e., unique patient episodes). Institutional review boards at the Tribhuvan University approved the study before its initiation. Parameters retrieved from the patient records included demographics, background conditions and clinical symptoms, duration of hospital stay (for patients who were hospitalized), empiric antimicrobial treatment; information on occupation and exposure (e.g., animal contact, contact to similar cases), and clinical outcome.

Based on Clinical and Laboratory Standard Institutions (CLSI) criteria 2016 (M100-S26) unless otherwise noted.

CLSI criteria 2016 (M100-S26) did not specify Salmonella spp. as they did for other fluoroquinolones, and thus, antibiotic susceptibility was left blank.

In this study, we identified the molecular and clinical epidemiology of S. Paratyphi A in Kathmandu, Nepal. As we included sequential patients with bacteremia due to S. Paratyphi A, our findings would reflect the epidemiologic characteristics of this endemic region. It was revealed that S. Paratyphi A mainly affects relatively young subjects. The high prevalence of fever is consistent with recent reports on S. Typhi and S. Paratyphi bacteremia.10 In our cohort, the prevalence of abdominal pain was slightly higher, whereas diarrhea and vomiting were less prevalent than in previous reports.10 This might be due to differences in baseline characteristics, including age, of the tested population.

In this study, the antibiotic susceptibility and MICs revealed patterns of re-emergence of susceptibility to conventional antibiotics (e.g., chloramphenicol, trimethoprim/sulfamethoxazole, and ampicillin) similar to those described previously.11 On the other hand, MICs for quinolones were elevated. Importantly, S. Paratyphi A isolates of 10 patients who received ciprofloxacin as empiric therapy showed ciprofloxacin MICs ≥ 0.5 μg/mL, and one patient who received ofloxacin carried S. Paratyphi A with an ofloxacin MIC of 2 μg/mL. Along with recent trial results on the use of gatifloxacin,10 reconsideration is warranted in terms of empiric antimicrobial treatment against S. Paratyphi A bacteremia in Nepal.

Based on phylogenetic analyses, there seem to be two distinct endemic strains of S. Paratyphi A in the study region. The major endemic strain was genetically diverged as compared with outbreak-associated isolates in China.12 The relatively high prevalence of patients who handle food (e.g., food-handling business, housewives) and patients who have close contact with other people (e.g., students) in this study suggests a potential point of intervention to reduce the transmission of S. Paratyphi, for which no vaccine is readily available.

High relatedness, coupled with high prevalence of reduced susceptibility to fluoroquinolones, was observed in S. Paratyphi isolated from patients with bacteremia in Nepal, Kathmandu. Further studies are warranted in terms of appropriate effective therapy and effective infection control approaches in this region.