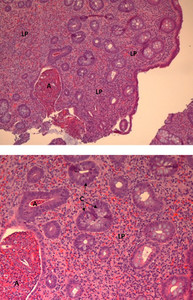 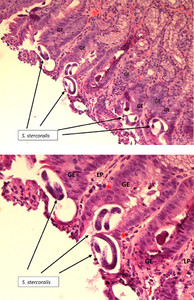 Case Report: A Case of Recurrent Strongyloides stercoralis Colitis in a Patient with Multiple Myeloma

Strongyloides stercoralis chronic infection is frequently subclinical and thus under-recognized, although its increasing prevalence in nonendemic regions has implications for immunocompromised hosts. We present a 75-year-old male with stage II multiple myeloma who presented with relapse of Strongyloides infection after initial treatment, negative surveillance testing, and subsequent resumption of chemotherapy for his multiple myeloma. The optimal regimen for secondary prophylaxis against recurrent infections is unknown. Secondary prophylaxis should be considered for patients who recur and/or remain at high risk of recurrence because of ongoing immunosuppression. We implemented a prophylactic regimen of ivermectin 200 mcg/kg once monthly. In addition, improved laboratory assays for strongyloidiasis are needed to aid with diagnosis, monitoring of treatment response, and early detection of relapse.