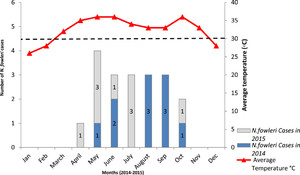 Naegleria fowleri causes primary amoebic meningoencephalitis (PAM) which is almost always fatal. Naegleria fowleri is waterborne, and its infections are usually associated with aquatic activities but it can also be transmitted via the domestic water supply. An increasing number of N. fowleri cases have been reported from Pakistan. Improved methods for diagnosis are required. We report the utility of polymerase chain reaction (PCR) for the diagnosis of N. fowleri in patients suspected of PAM. One hundred and sixteen cases suspected of having PAM were examined. Cerebrospinal fluid (CSF) specimens were tested at the Aga Khan University Hospital, Karachi. Nineteen CSF specimens were positive for N. fowleri using PCR. Naegleria fowleri positive patients had a median age of 28 years and were 84% male and 16% female. Overall, CSF wet preparation microscopy was performed in 85 (73%) cases and identified that seven specimens were positive for motile trophozoites. The CSF wet preparation results were available for 15 of the 19 N. fowleri PCR positive CSF samples; seven (40%) wet preparations were positive. Our data highlight the threat of N. fowleri infection as a cause of PAM. It also emphasizes the utility of the PCR-based diagnosis of the amoeba for early diagnosis and management of the disease.

Naegleria fowleri is a virulent, thermophilic, and free-living amoeba which causes rare but fatal primary amoebic meningoencephalitis (PAM). Naegleria fowleri can be isolated from soil and fresh water. Naegleria fowleri can proliferate in fresh water especially in the summer time when higher temperatures are conducive for its growth. Although N. fowleri infections are most often associated with recent exposure to fresh water during recreational activities, they have also been caused by inadequately chlorinated domestic water supply or swimming pools.1,2 Recently, the PAM cases associated with nasal irrigation using neti pots and ablution practices (ritual nasal cleansing) have also been diagnosed.3,4

Naegleria fowleri invades the nervous system when contaminated water is deeply inhaled via the nose. The amoeba invades the nasal mucosa, migrates along nerve fibers and enters the olfactory bulb to reach the cribriform plate, and enters the brain. Within a few days of exposure, patients present with headache, fever, nausea, stiff neck, confusion, seizures, and hallucinations. The disease progresses rapidly, causing death within an average of 10 days from exposure.5

The first case of N. fowleri was reported from Karachi, Pakistan, in 2008, in a 25-year-old male who had a history of swimming in a river, part of the domestic water supply to Karachi.6 Naegleria fowleri has also been shown to be present in the piped water supply of Karachi.7 Additional cases of PAM diagnosed at Aga Khan University Hospital (AKUH), Karachi, Pakistan, have been described previously.8,9 PAM can be diagnosed using microscopic methods, such as the wet film preparation of cerebrospinal fluid (CSF), CSF culture, and amebic antigen detection. In addition, the direct detection of parasite DNA by polymerase chain reaction (PCR) can be performed in CSF, biopsy, or tissue specimens. In 2013, improved algorithms for laboratory based and clinical diagnosis of PAM in severe meningoencephalitis were initiated at AKUH. Both wet preparation examination of CSF and PCR for N. fowleri became part of the routine workup at AKUH for cases suspected of PAM. PAM was suspected in patients presenting with signs and symptoms consistent with Acute Bacterial Meningitis (ABM) during the hotter months of the year (March to October, Figure 1). Factors which increase the likelihood of PAM over ABM include: male in gender, age under 40 years, and presentation with nausea and seizures. All patients with a history of fever, headache, and altered mental status were also screened for PAM. Patients presenting to AKUH in summer months with clinical features compatible with PAM, were given antibiotics; empiric treatment for PAM was initiated if there was an anticipated delay in diagnostic confirmation. This comprised amphotericin B 1.5 mg/kg every 12 hours for 3 days with 1 mg/kg/day intravenous (IV) and 1.5 mg intrathecal, azithromycin 10 mg/kg once daily (OD), fluconazole 800 mg in 24 hours, rifampin 600 mg IV OD, chlorpromazine up to 2 gm/day, and miltefosine 150 mg/day.

We present a retrospective review of cases who presented with PAM-like manifestations and a clinical disease course consistent with PAM at AKUH during May 2014 to October 2015. The study received approval from the Ethical Review Committee, The Aga Khan University, Karachi. All requests received for N. fowleri PCR and CSF wet preparation examinations by the Clinical Laboratory, AKUH, during the study period were evaluated. Accompanying patient history submitted with each test request was reviewed. As per routine, laboratory protocol history collected included demographic information, history of aquatic activities, and clinical history pertaining to primary symptoms, such as fever, severe headache, vomiting, and seizures.

A total of 116 CSF specimens were received for testing of suspected PAM by the PCR and/or wet preparation examination. Patients were predominately male, N = 86 (74%), with a median age of 33.5 years (range, 9–90 years).

Naegleria fowleri PCR was performed for 116 CSF samples of which 19 (16%) were positive. Ten positive CSF samples were from 2014, and nine were identified in 2015. Of the N. fowleri positive subjects, 16 (84%) were males with a median age of 28.5 years. The three female patients had a median age of 22 years. Laboratory testing of the CSF for N. fowleri PCR was within 24 hours during which the treating physician was informed in each case.

Presenting symptoms in PAM patients were fever, headache, vomiting, and followed by severe neurological involvement, such as altered consciousness and seizures, and two patients were found neurologically dead at the time of presentation. The average duration of illness with the onset of severe symptoms was 3 days for N. fowleri positive cases. Most cases 12/19 (63%) were reported during summer months (May to September) when average daytime temperatures were between 33°C and 36°C in Karachi. The PAM patients were predominantly male (84%) which concurs with other studies; however, the reason for this predilection to males is not clear.11 Eleven PAM cases were inpatients at AKUH. Seven PAM cases were from other parts of Karachi and the Sindh province, whereas one case was from Lahore, Punjab province.

The 11 PAM patients at AKUH were admitted within 3–4 days of the start of initial symptoms which included a severe headache accompanied by high grade fever. They were all administered using the PAM antibiotic protocol. However, in 10/11 cases, the disease rapidly progressed to severe illness, and the patients expired within 3–4 days due to severe neurological damage.

One patient was successfully treated for PAM. The survivor was a 25-year-old male who presented with a 3-day history of high grade fever, headache, vomiting, drowsiness, and generalized tonic-clonic seizures. As per AKUH guidelines, he was administered the PAM treatment protocol. The patient showed clinical improvement after a week of admission, was mobilized after 2.5 weeks, and then discharged after 4 weeks. He subsequently made a full recovery within 6 months.

Of the 19 PAM cases in this study (2014–2015), only one had a history of swimming in a pool. This corresponds with a previous report from Pakistan which linked N. fowleri infection exclusively with tap water exposure.8 Over the years, there has been an upsurge in the number of PAM cases diagnosed during summer months in Karachi, Pakistan.12 Since the first confirmed case of N. fowleri in 2008,6 an average of 10 cases per year have been reported.8,13 This frequency has been associated with the rising temperature of domestic water (May to September) and poor chlorination of potable water sources.14 From April to October, the average temperature in Karachi remains above 30°C and almost all N. fowleri positive cases have been diagnosed during this period.15 In 2015, six PAM cases reported in May and July were again attributed to hot weather and a heat wave in July when temperatures soared above 40°C.16

Because of an intermittent water supply, especially in the populous city of Karachi, water is stored in tanks to ensure continuous domestic supply. Ghanchi et al.7 suggest that water stored in overhead tanks during summer months with negligible chlorine levels can facilitate the propagation of N. fowleri amebae which can lead to PAM cases.

It is likely that the PAM cases in Pakistan may be under-reported because of limited facilities for diagnosis and testing, lack of awareness of this rare infection among clinicians, and under-resourced health facilities. PAM cases may be misdiagnosed as bacterial meningitis. Additionally, difficulty in identification of N. fowleri on wet preparation may lead to delay in appropriate treatment and management of PAM cases.11

In this N. fowleri endemic region, there is a great need for improved diagnostics for the amobea. The PCR-based diagnosis of CSF is more sensitive than wet preparation examination and should be the method of choice for N. fowleri diagnosis. Generally, as PAM presents during the summer months, there is a need for enhanced chlorination of domestic water supply to reduce the risk of ameobic growth. Also, public awareness needs to be raised regarding methods to reduce the risk of acquiring N. fowleri infection.