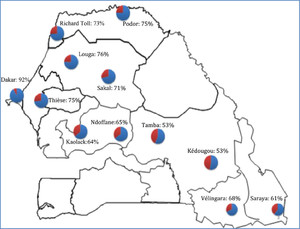 In Senegal, antimalarial drugs used in treatment and prevention of malaria are one of the main reasons for the current success in controlling malaria. However, the successful control of malaria is highly dependent on continued effectiveness of these drugs which may be compromised by the spread of drug resistance. Therefore, surveillance of drug resistance in the malaria parasites is essential. The objective of this pilot study was to test the feasibility of routinely sampled malaria rapid diagnostic tests (RDTs) at a national scale to assess the temporal changes in the molecular profiles of antimalarial drug resistance markers of Plasmodium falciparum parasites. Overall, 9,549 positive malaria RDTs were collected from 14 health facilities across the country. A limited random set of RDTs were analyzed regarding Pfcrt gene polymorphisms at codon 72–76. Overall, a high but varied prevalence (> 50%) of the wild-type CVMNK haplotype was observed including a higher CVMNK prevalence in the northern part (75%) compared with the southern part of the country (59%). With caution, the study provides a proof of concept that reuse of discarded P. falciparum positive RDTs can be applied in large-scale surveillance of antimalarial drug resistance.