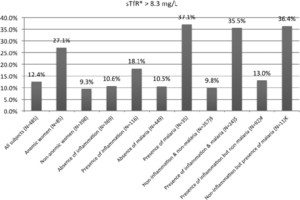 Anemia is common during pregnancy and is associated with poor outcomes. Objectives were not only 1) to determine the prevalence of anemia and iron deficiency (ID) but also 2) to identify other factors associated with anemia in pregnant women from South Kivu province, in the eastern Democratic Republic of Congo. Between December 2013 and March 2014, 531 women attending the first antenatal visit in their second trimester of pregnancy were recruited. Sociodemographic, clinical, and biological data were collected. Hemoglobin (Hb) was determined by a portable photometer (Hemocue® Hb201+), and anemia was defined as altitude-adjusted Hb < 110 g/L. ID was defined as serum ferritin < 15 μg/L adjusted for inflammation status (C-reactive protein [CRP] > 5 mg/L and/or α-1-acid glycoprotein > 1 g/L) whereas hypoalbuminemia was defined as serum albumin < 35 g/L. A Giemsa-stained blood smear was used to diagnose malaria. The median age (interquartile range ) was 25.5 (21.1–31.3) years, with anemia in 17.6% and ID in 8%. Malaria was present in 7.5% and hypoalbuminemia among 44%. Soluble transferrin receptor concentration was higher in the presence of inflammation and/or malaria. In the final logistic regression model, factors independently associated with anemia were malaria (adjusted odds ratio [aOR]: 11.24 (4.98–25.37) P < 0.001), hypoalbuminemia [aOR: 2.14 (1.27–3.59); P = 0.004] and elevated CRP [aOR: 1.94 (1.10–3.45); P = 0.022]. ID was not highly prevalent and not associated with anemia in our population. Effective control of anemia during pregnancy in this region should consider fighting malaria and other infectious diseases in combination with measures to improve women’s nutrition, both before and during pregnancy.