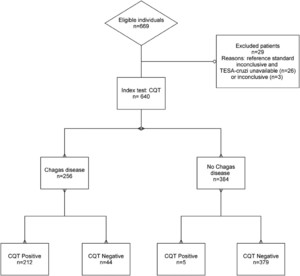 Accuracy of a Rapid Diagnostic Test (Cypress Chagas Quick Test®) for the Diagnosis of Chronic Chagas Disease in a Nonendemic Area: A Retrospective Longitudinal Study

We analyzed the accuracy of Chagas Quick Test®, a rapid diagnostic test, for the diagnosis of chronic Chagas disease through a retrospective study on a cohort of 669 patients consecutively examined at a single reference center in Italy, during a 7-year period. We observed high concordance with serological reference standard but low accuracy for screening purposes (sensitivity/specificity: 82.8%/98.7%) at least in our nonendemic context.

Chagas disease (CD) is a potentially life-threatening infection caused by the hemoflagellate protozoan Trypanosoma cruzi. CD is mainly present in 21 Latin American (LA) countries, where it is mostly transmitted by triatomine vectors.1

Direct parasitological methods and polymerase chain reaction are not recommended for the diagnosis of chronic CD because parasitemia is usually fluctuating.2 Conversely, serology is considered as the best option in this phase. Enzyme-linked immunosorbent assays (ELISAs), indirect immunofluorescence, and indirect hemagglutination tests are commonly used.2–4 According to the World Health Organization (WHO) recommendations, a definitive diagnosis of CD is determined by two positive serological tests based on different antigens.2 However, serodiagnosis requires qualified staff, specific equipment, and infrastructure that are unavailable in most endemic regions5 and is considered excessively time-consuming in the context of population serosurveys both in endemic and nonendemic areas.

Many rapid diagnostic tests (RDTs), which are easy to perform without special equipment, are commercially available for CD diagnosis. RDTs may be either qualitative or semiquantitative, and they provide results in a short time. They rely on different test principles: immunochromatography, particle agglutination, immunofiltration, and immunodot.5

To date, there are scant independent studies on the accuracy of RDTs for CD. Despite a good performance declared by manufacturers, the RDTs did not reach the accuracy of ELISAs or other techniques.5–8

Chagas Quick Test (CQT), Cypress diagnostics, Belgium, is a rapid immunochromatographic assay for the detection of antibodies against T. cruzi. It is based on a recombinant antigen, composed of nine different epitopes, and can be used on serum or whole blood.9 A multicenter case-control study supported by the WHO demonstrated good performance compared with other RTDs.5

We evaluated CQT accuracy on individuals consecutively screened for CD at the Center for Tropical Diseases of Negrar (CTD) during a 7-year period (from April 2009 to June 2015).

Individuals at risk for CD (born in LA endemic countries, and/or with a LA mother, or travelers to LA endemic countries) were invited for screening through an active recruitment campaign among LA community residents in Northern Italy. In the same period, individuals at risk for CD (same criteria as previously mentioned) attending the CTD for any reason were also offered the screening (“passive screening”). Consenting individuals were included in the study if both the index test and the reference standard tests (see below) were available. The sample size (600 subjects) was calculated through nomograms for diagnostic studies for a sensitivity of 90% and a confidence interval (CI) of 5%.10

Reference standard for diagnosis was based on the results of a lisate antigen–based ELISA (ELISA para Chagas III®, BioChile, Chile) (Lis-ELISA) and a recombinant antigen-based ELISA (Bio-Elisa Chagas®, Biokit, Spain) (Ric-ELISA). The two ELISAs were run in parallel by highly-qualified CTD staff. Repeatedly discordant samples were tested with an escretory-secretory antigen immunoblot (TESA-cruzi, Biomerieux, Brazil). We considered CD positive, those individuals with two positive tests. Individuals with repeatedly discordant ELISA results and unavailable or inconclusive TESA-cruzi were excluded from the analysis.

The test accuracy was assessed by calculating the sensitivity and specificity. Uncertainty was quantified with the 95% CIs.

The study population flow is summarized in the Standards for Reporting Diagnostic Accuracy flow diagram (Figure 1).

The main results are summarized in Table 1.

RDT sensitivity in the population enrolled through active screening campaigns resulted slightly lower (81.9%, 95% CI: 77.6–87.26), than in the whole population, whereas the specificity was exactly the same (98.7%, 95% CI: 96.6–99.6). If we consider the passively enrolled versus the whole population, we recorded statistically significant differences for the median age (35.8 years, SD 19.2 and 36.6 years, SD 14.4, respectively), proportion of Bolivian nationals, and CD prevalence (21.6 and 40.0%, respectively), but not for gender proportion. CQT sensitivity resulted higher in the passively screened subgroup (Table 1). If calculated against the ELISAs with exclusion of the 83 discordant cases, the accuracy of CQT improved (sensitivity/specificity 91.07%/99.45%, PPV [positive predictive value]/NPV [negative predictive value] 99.03%/94.74%).

To our knowledge, this is the first study on the accuracy of Cypress CQT based on a consecutively enrolled population, thus limiting the well-known risk of bias of case-control studies.11 Despite the limitations of our study, especially with reference to the composition of the population (most individuals from Bolivia, an area of high prevalence), we can conclude that CQT showed a reasonable accuracy and a high concordance with both Ric and Lis-ELISA. Nevertheless, the test sensitivity and NPV resulted too low to be used for screening purposes in a high prevalence population. Sánchez-Camargo et al.5 evaluated eleven RDTs for CD in a multicenter case-control study, finding that six RDTs had good performances and among these CQT was one of the most accurate. Its sensitivity and specificity were 92.9% and 93.2%, respectively. They conclude that “these (six) tests can be recommended for screening and surveillance in areas of endemicity and nonendemicity, but the results should be confirmed in a reference laboratory”. The different study design could partly explain the differences with our findings.11

Other RDTs, namely Stat-Pak™, Chembio Diagnostic Systems, USA and Simple Chags WB™, Operon, Spain, have been evaluated in cohort studies in Europe.6,12,13 The latter test was evaluated in two studies conducted in Spain, with variable results (sensitivity and specificity ranged from 86.3% to 100%, and from 94.4% to 96.8%, respectively).12,13 Stat-Pak was used for the screening of 999 migrants living in Switzerland and showed better performance in sensibility and specificity of 96% and 99.8%, respectively, with both NPV and PPVs above 98%.6 Despite the limitation given by a big proportion of Bolivians in the study population (nearly all positives were Bolivians), the authors concluded that the accuracy of Stat-Pak was good enough to increase case detection among migrants living in Europe.

Nevertheless, according to our results and the data available in the literature, we believe that the role of RDTs for CD control both in endemic and nonendemic settings should be better defined. While they can be a useful and user-friendly tool for epidemiological surveys and for improving case detection and thus access to diagnosis and treatment, RDTs cannot be recommended for donor selection in transfusion or transplant medicine, nor for routine screening of high-risk groups such as pregnant women coming from high prevalence countries/areas.