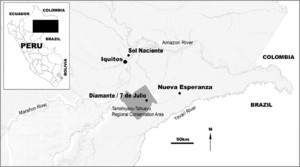 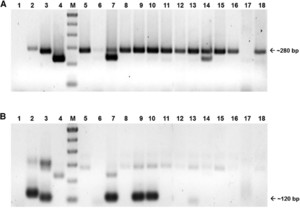 Because of its high prevalence, and occurrence in 21 countries, Chagas disease is one of the most important, neglected tropical diseases in Latin America.1 It is estimated that between 6 and 8 million people are infected in Latin America, of whom 12,000 die of the disease each year.1 The Amazon Basin, inhabited by 30 million people, is the largest tropical biome in which both animal reservoirs and multiple species of triatomine vectors of Trypanosoma cruzi coexist, representing a major threat to human populations.2

About 33 species in six mammalian genera act as reservoirs for T. cruzi in the Amazon, including marsupials, bats, rodents, edentates, carnivores, and primates.3 However, the challenges of studying wildlife populations in remote areas have limited the identification of natural hosts of T. cruzi in the Peruvian Amazon, and only three are previously documented: Saimiri boliviensis, Saguinus nigricollis and Didelphis paraguayensis pernigra,4 whereas more are described from regions of the Brazilian Amazon.2,5

Chagas disease is mainly transmitted by contact with feces from infected triatomine insects.4 Oral transmission through food and beverages contaminated with such vector feces has also been documented and may be more important than previously considered, accounting for up to 70% of acute cases in the Brazilian Amazon.6 Oral transmission through the consumption of undercooked meat may also occur, but has not been conclusively confirmed.7–9 As hunting is one of the main subsistence activities in the Amazon Basin, local villagers might be at the risk of infection during excursions into the forest. This study evaluated the prevalence of T. cruzi and other trypanosomatids in blood samples from four taxonomic orders of wild mammals hunted and consumed by the inhabitants of rural communities in the Peruvian Amazon.

We studied a sample of 300 wild mammals from 13 species and four taxonomical orders that had been hunted for subsistence and household income by local villagers in three remote indigenous communities in the Peruvian Amazon from 2009 to 2011 (Table 1, Figure 1). No sampled animals were killed exclusively for this study. Blood samples were directly spotted onto Whatman paper during butchering by trained local villagers, preserved on silica gel desiccant, transported to the US Naval Medical Research Unit No. 6 in Lima, and stored at −80°C. The research protocol was approved by the Dirección General de Flora y Fauna Silvestre (0350-2012-AG-DGFFS-DGEFFS) of Peru.

Prevalence of Trypanosoma cruzi and trypanosomatids in four orders and 13 animal species from three rural communities of the Peruvian Amazon, 2009–2011

There were statistically significant differences between the four orders studied in the prevalence of T. cruzi (P = 0.003) and trypanosomatids (P = 0.002).

Eight families from Nueva Esperanza reported hunting 739 animals over 3 years. We estimated a yearly harvest of 31 animals per family, and 1,847 animals for the whole community of approximately 307 inhabitants in 60 families. Considering only species that were T. cruzi–positive in our study, we estimated that 45 infected animals might be consumed annually in the community: C. paca (N = 24), N. nasua (N = 17), Dasypus novemcinctus (N = 2), and Dasyprocta spp. (N = 2).

Trypanosoma cruzi was found in all sampled orders (Rodentia, Carnivora, and Edentata), except Artiodactyla, and in four of seven species with five or more specimens tested, suggesting a high prevalence of T. cruzi in frequently hunted mammals. Coatis (N. nasua) showed the highest prevalence of T. cruzi, confirming the important role of this carnivore in the sylvatic cycle of Chagas disease in the Peruvian Amazon and consistent with evidence from Brazil.11,12 It has been proposed that coatis may become infected through oral transmission rather than vectorial transmission by ingesting contaminated triatomines and feeding on small mammals.12 We also found T. cruzi (4.2%) in armadillos (Dasypus novemcinctus), which are well-known reservoirs of T. cruzi in both peridomestic and sylvatic cycles.13 Finally, we found T. cruzi naturally infecting large rodents (C. paca, 5.5%, and Dasyprocta spp., 2.6%), which is also consistent with the findings in the Brazilian Amazon.14,15 Although epidemiological studies on large rodents are limited, they are considered ancient hosts of T. cruzi, and may be effective reservoirs.16 The large rodents C. paca and Dasyprocta spp. are unlikely to be predated by coatis, but are predated by larger carnivores (e.g., felines), which in turn could possibly become infected. The peccaries Tayassu tajacu and Tajassu pecari have also been suggested as reservoirs of T. cruzi in a previous study,12 however, we found no peccary infected. Our study in remote and isolated communities shows a 5.0% prevalence of T. cruzi in four species of large rodents, carnivores, and edentates. Although the high natural prevalence of T. cruzi infections in frequently hunted wild mammals might suggest a large T. cruzi sylvatic reservoir in the Peruvian Amazon, we cannot rule out the possibility that the disease could make these mammals more vulnerable to be hunted, and thus the reported prevalence might be overestimating the true prevalence in the Amazon.

The high prevalence of trypanosomatids (38.3%) found in all sampled mammalian orders suggests that several parasites of this family in remote Amazonian regions may be widely distributed across different mammalian groups rather than being confined to specific hosts. We cannot exclude that preinfection with other trypanosomatids might increase the susceptibility to T. cruzi infection in these mammals as previously suggested for Trypanosoma lewisi and Leishmania chagasi.17

Dogs may also play an important role in the peridomestic cycle of Chagas disease as potential reservoirs and may be accurate sentinels for identifying areas of active T. cruzi transmission.6,18 Although we did not sample domestic dogs in this study, they may help to establish a link between the peridomestic and sylvatic cycles of T. cruzi in rural communities as dogs usually accompany hunters on foot during excursions into the forest and can be vectorially infected. In addition, dogs in these communities are often fed raw viscera and oral transmission cannot be ruled out.

Evidence of oral transmission of T. cruzi through consumption of undercooked meat is currently inconclusive, but its occurrence in the Amazon basin is suspected,8 and to our knowledge, no study has rejected this hypothesis. The consumption of bushmeat in our sampled communities was typical of bushmeat consumption across Amazon rural communities, in which wild meat represents an important animal protein source. An estimated 113,000 wild animals are hunted annually in the department of Loreto.19 We estimated that the study community annually hunts and eats 45 animals infected with T. cruzi, translating to 0.75 infected animals typically consumed by a large extended family per year, not accounting for sharing of meat between families, suggesting recurring opportunities of infection.18 Further studies addressing a relationship between wild meat consumption and Chagas disease are required to better understand the risk of infection in Amazonian communities.

In Peru, 830 human cases of T. cruzi were reported from 2004 to 2015,20 most of them (81.3%) in the Peruvian southern highlands, in the department of Arequipa. Only 23 cases were documented in Loreto, Peruvian Amazon’s largest department in urban and rural population, which probably greatly underestimates the burden of T. cruzi infection, because of the absence of routine diagnosis and limited access to healthcare in remote indigenous communities.