Neighbor-joining phylogenetic tree of DENV-2 circulating in Mozambique during the 2015 DENV outbreak. Isolates described in this study are marked with a black dot. The phylogenetic tree was constructed using the MEGA 6 software (http://www.megasoftware.net/), by the neighbor-joining method and the kimura II parameter model based on the analysis of the best-fit model for each dataset as provided by the software. The phylogeny was inferred based on envelope-nonstructural (E/NS1) junction gene nucleotide sequences (240 positions) from 33 sequences. The nucleotide sequences identified are accessible in GenBank, accession numbers: BanKIt 203333 Seq1- FA0004/15/MZ/2015: KY815103, BanKIt 203333 Seq2- FA0012/15/MZ/2015: KY815104, BanKIt 203333 Seq3- FA0033/15/MZ/2015: KY815105.

The monthly distribution of the 290 suspected dengue cases and the resulting positivity in relation to PCR, nonstructural protein 1 (NS1), and IgM. This figure appears in color at www.ajtmh.org. 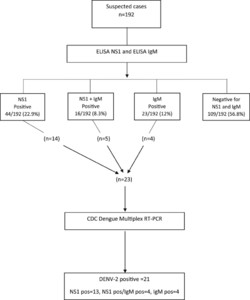 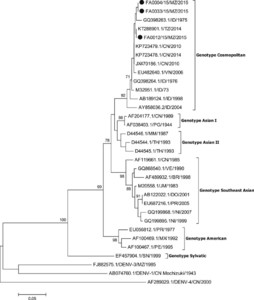 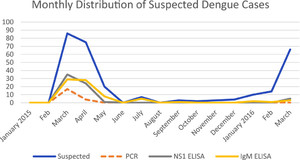 After the report of an outbreak of dengue virus serotype 2 in 2014 in Nampula and Pemba cities, northern Mozambique, a surveillance system was established by the National Institute of Health. A study was performed during 2015–2016 to monitor the trend of the outbreak and confirm the circulating serotype of dengue virus (DENV). After the inclusion of consenting patients who met the case definition, samples from 192 patients were tested for the presence of nonstructural protein 1 antigen, and 60/192 (31%) samples were positive. Further analysis included DENV IgM antibodies, with 39 (20%) IgM positive cases. Reverse transcriptase (RT) PCR was performed for identification of the prevailing DENV serotype; 21/23 tested samples were DENV-2 positive, with DENV-2 present in both affected cities. When sequencing DENV, phenotype Cosmopolitan was identified. The surveillance indicates ongoing spread of DENV-2 in northern Mozambique 2 years after the first report of the outbreak.