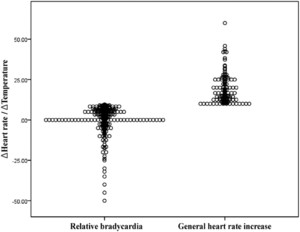 To investigate the relationship between heart rate and temperature, we examined 493 febrile patients with documented disease. These patients were diagnosed serologically and analyzed retrospectively: 337 (68.4%) responded to fever with increased heart rate < 10 beats/minute/°C (relative bradycardia [RB]), and 156 patients had a heart rate response ≥ 10 beats/minute/°C (general heart rate increase [GHRI]). The RB group had a higher median resting heart rate and lower heart rate at maximum temperature than the GHRI group. Despite differences in heart rate response, no significant differences were seen in clinical outcomes (acute kidney injury, systemic inflammatory response syndrome (SIRS), and death). We concluded that most patients with scrub typhus presented with RB. In scrub typhus infection, RB can be included as one of the clinical features for differential diagnosis from other infectious diseases.

Scrub typhus is a mite-borne infectious disease caused by Orientia tsutsugamushi. The disease occurs 7–10 days after the bite of an infected mite.1 Variable clinical manifestations and complications related to scrub typhus have been reported. Because the pathogenesis of scrub typhus is increased vascular permeability and perivasculitis of small blood vessels, variable cardiac complications can be caused by damage to cardiac tissue.2 Arrhythmia is one of the reported cardiac complications and includes nonsymptomatic electrocardiographic changes and serious arrhythmias such as ventricular tachycardia and Torsades de pointes, as well.3–5

We conducted a retrospective electric medical records’ review of 493 patients, serologically diagnosed with scrub typhus from September 2000 to February 2010 in a tertiary care referral hospital. Excluded were patients treated with any kinds of heart rate lowering agents or having febrile illnesses other than scrub typhus. The study protocol was reviewed and approved by the institutional review board (IRB) of Chonbuk National University Hospital (IRB Number; CUH 2016-08-002).

Body temperature and heart rate were collected on presentation, during treatment, and after symptom resolution. Fever was defined as temperature greater than 37.8°C. Febrile heart rate and temperature were reviewed on initial patient evaluation, before application of antibiotic treatment. Baseline temperature and heart rate were assessed when patients had become afebrile after treatment. Although no uniform definition of RB exists, we defined it a priori as an increase in the heart rate from a baseline of less than 10 beats/minute/°C increase in temperature.6 Patients exhibiting a pulse increase greater than 10 beats/minute/°C were classified as without having RB (GHRI).

A positive diagnosis of scrub typhus was defined as a passive hemagglutination assay (PHA) titer against O. tsutsugamushi of 1:80 in a single serum sample or a 4-fold or greater increase in titer at follow-up.11 PHA was performed at the NeoDIN Medical Institute in Seoul, Korea, using Genedia Tsutsu PHA II test kits for qualitative and quantitative detection of antibodies against O. tsutsugamushi in human serum. Sheep erythrocytes sensitized to Karp and Gilliam strains of O. tsutsugamushi, including the Boryong strain found in Korea, were used with the test kits.12

Characteristics of 493 patients with scrub typhus

RB is a poorly defined clinical term that is often used in the literature and in daily practice as a clinical sign for an individual patient or a characteristic feature of some diseases. The term has been defined in several studies.13–15

RB is an important diagnostic finding for variety of infectious diseases including typhoid fever, Legionnaires’ disease, psittacosis, typhus, leptospirosis, malaria, and babesiosis.15 RB may be used to differentiate among infectious diseases in specific clinical situations. Because the prevalence of RB in patients with scrub typhus was up to 70% in our study, it could also be used as a diagnostic feature to differentiate among conditions.

The RB did not seem to affect clinical outcomes in this study. This result might suggest that RB caused by O. tsutsugamushi does not mean critical heart involvement. The pathogenesis of RB in patients with scrub typhus has not been proven. Future works could determine the pathogenesis.

In conclusion, most patients with scrub typhus are associated with RB, not related to clinical outcome. RB in scrub typhus can be considered as one of the clinical features for differential diagnosis from other infectious diseases.