Distribution of histidine-rich protein 2 (HRP2) concentration in individuals of all ages attending outpatient clinics in low-transmission Huambo and high-transmission Uíge Provinces, Angola, stratifying by presence or absence of febrile illness. 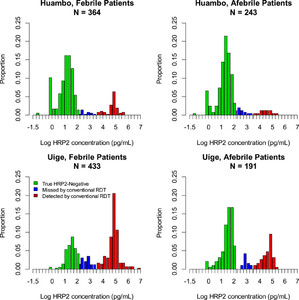 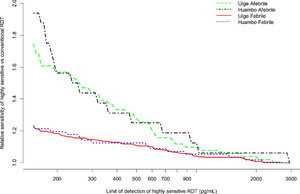 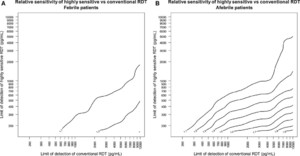 Throughout sub-Saharan Africa, malaria diagnostic testing is offered at all levels of the health system, often including the community level. This scale of access is largely the result of the roll out of malaria rapid diagnostic tests (RDTs) following the 2010 change in World Health Organization recommendations favoring universal testing of all suspected malaria cases before treatment with an antimalarial.1 More than 270 million RDTs were procured in 2015 compared with fewer than 88 million in 2010, and RDTs accounted for 74% of all diagnostic testing in sub-Saharan Africa in 2015.2 The role of RDTs in improving malaria case management is particularly crucial in sub-Saharan Africa, where resources to support widespread use of microscopy are limited.

RDTs detect the presence of malaria antigens in patients’ blood, and the Plasmodium falciparum-specific histidine-rich protein 2 (HRP2) test is predominant in sub-Saharan Africa. The performance of RDTs is evaluated annually in an independent, systematic product-testing process,3 based on their ability to reliably identify positive controls corresponding to parasite density loads of at least 200 parasites/µL. Due to a variety of factors including differences in HRP2 expression among different strains of P. falciparum, duration of infection, host immunity, and sequestration of parasites, HRP2 concentrations may vary in samples with the same parasite density. There is no single standard HRP2 limit of detection (LOD) for malaria RDTs, with the HRP2 concentrations of reference strain standardized positive controls used in product testing ranging from 0.59 to 73.7 ng/mL3.

There is growing interest in the development of highly sensitive RDTs (hsRDTs), with one manufacturer, SD Bioline, reporting a LOD 8–16 times lower than conventional RDTs. This interest has been motivated largely by the increased attention being paid to efforts to eliminate malaria at the national and sub-national levels and the notion that hsRDTs are needed to identify previously undetectable low-density infections to support the elimination of the infectious reservoir in humans. However, the ability of hsRDTs to detect lower density infections is unknown and has not been systematically evaluated, and there are no clear data to guide use of these novel tests. Here, we characterized the distribution of HRP2 concentrations in outpatients at health facilities in rural Angola to allow assessment of the potential added benefit of hsRDTs beyond conventional RDTs under a range of conditions.

Cross-sectional health facility surveys4 representative at the province level were conducted in early 2016 in two provinces in Angola; mesoendemic-stable Huambo Province, and hyperendemic Uíge Province. A random subset of outpatients of all ages was selected independent of symptoms, a conventional P. falciparum HRP2/Plasmodium vivax-specific lactate dehydrogenase RDT (Ag Pf/Pv, product code RMVM-03091; SD Bioline, Yongin, Republic of Korea) was administered, and blood was collected on filter paper. Blood samples were transported to U.S. Centers for Disease Control and Prevention (CDC) laboratories in Atlanta, where the HRP2 concentration was measured quantitatively using a newly described bead-based assay.5 Participants provided informed consent and the survey was reviewed by Human Subjects Review Boards at the CDC and the Angolan Ministry of Health.

The distribution of HRP2 concentration was bimodal in the patient populations (Figure 1). Between 60% and 70% of sampled patients reported a febrile illness, and, of these, 19% were determined to be HRP2-positive by the bead-based assay in low-transmission Huambo Province, compared with 67% in high-transmission Uíge Province. The LOD for the conventional RDT in both provinces was estimated to be 3.0 ng/mL (Supplemental Figure 1), making the conventional RDT capable of detecting 81% of the HRP2-positive febrile patients in Huambo and 82% in Uíge. Of the afebrile patients, 13% were positive for HRP2 by the bead assay in Huambo and 35% in Uíge, and, of these, 52% and 77%, respectively, had an HRP2 concentration above the LOD of the conventional RDT.

The expected observation that hsRDTs could provide greater added utility in afebrile patients is reflected in the relationship between the relative sensitivity and the LODs of the hsRDT and the conventional RDT (Figure 3). For example, in afebrile individuals, an hsRDT with a LOD of 200 pg/mL would be estimated to detect an additional 50–60% of HRP2 + persons as compared with a conventional RDT with a LOD of 3,000 pg/mL. Under these same conditions for a population of febrile patients, this estimate is reduced to an additional 10–20% of cases detected by this hypothetical hsRDT.

RDTs differ from other malaria diagnostic tests since they measure the presence of parasite antigen, which does not necessarily indicate active infection. This is particularly important for RDTs detecting HRP2, since HRP2 can be produced in large quantities by the parasite during blood-stage infection and has been reported to circulate for weeks after successful resolution of an infection.6,7 The presence of HRP2 must be carefully interpreted in a clinical context, and current symptoms and past history of malaria episodes and treatment need to be taken into account. This caution is even more critical when hsRDTs are used since the lower the LOD of the RDT, the longer the duration of RDT positivity following resolution of infection. However, in elimination settings with very low parasite prevalence, a prolonged duration for detecting HRP2 may be a benefit as the opportunity to identify infection foci or on-going transmission is increased.

The data presented here show that the distribution of HRP2 concentrations in patients both with and without acute febrile illness was consistent among clinical outpatients in two different transmission settings in rural sub-Saharan Africa, suggesting a standard underlying population distribution of HRP2 concentration that is unaffected by the range of malaria transmission intensity included in this study. Similar studies should be performed in other settings to elucidate the HRP2 distribution in populations of people exposed to vastly different transmission intensity and other P. falciparum parasites than are the two populations described here. Although afebrile outpatients might approximate an asymptomatic community population, it would be important to validate these health facility based results in a survey of asymptomatic community members in a malaria elimination context, the most likely setting for the introduction of an hsRDT.

In both provinces surveyed here, conventional RDTs captured more than 80% of HRP2-positive individuals presenting with an acute febrile illness, the group of patients conventional RDTs are designed to detect. Thus, the marginal benefit of an hsRDT would be limited in the context of symptomatic malaria infections. There is, however, a more tangible benefit for hsRDTs in individuals without malaria symptoms where conventional RDTs missed up to half of all HRP2 antigenemias. The ability to detect these additional cases could be important in the context of mass screen and treat or reactive case detection strategies being considered for elimination efforts, where sensitive detection of low, asymptomatic parasitemia will be necessary to identify and treat all parasite reservoirs in the population.

The results confirm that an hsRDT would need to have a LOD substantially lower than conventional RDTs to provide any substantial benefit over conventional RDTs, approaching a LOD of 200 pg/mL. Malaria control programs will need to take into account the target population when weighing the additional utility of hsRDTs.