Location of the case-patients’ households and the Dinajpur Medical College Hospital, 2012.

Distribution of cases and timeline of lychee production and harvesting, northern Bangladesh, 2012. 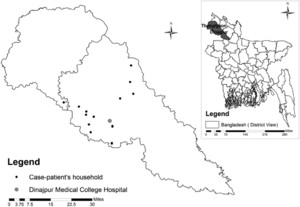 Outbreak of Sudden Death with Acute Encephalitis Syndrome Among Children Associated with Exposure to Lychee Orchards in Northern Bangladesh, 2012

Recurrent outbreaks of acute encephalitis syndrome (AES) among children in lychee growing areas in Asia highlight the need to better understand the etiology and the context. We conducted a mixed-methods study to identify risk factors for disease, and behaviors and practices around lychee cultivation in an AES outbreak community in northern Bangladesh in 2012. The outbreak affected 14 children; 13 died. The major symptoms included unconsciousness, convulsion, excessive sweating, and frothy discharge. The median time from illness onset to unconsciousness was 2.5 hours. The outbreak corresponded with lychee harvesting season. Multiple pesticides including some banned in Bangladesh were frequently used in the orchards. Visiting a lychee orchard within 24 hours before onset (age-adjusted odds ratio [aOR] = 11.6 [1.02–109.8]) and 3 days (aOR = 7.2 [1.4–37.6]), and family members working in a lychee orchard (aOR = 7.2 [1.7–29.4]) and visiting any garden while pesticides were being applied (aOR = 4.9 [1.0–19.4]) in 3 days preceding illness onset were associated with illness in nearby village analysis. In neighborhood analysis, visiting an orchard that used pesticides (aOR = 8.4 [1.4–49.9]) within 3 days preceding illness onset was associated with illness. Eating lychees was not associated with illness in the case–control study. The outbreak was linked to lychee orchard exposures where agrochemicals were routinely used, but not to consumption of lychees. Lack of acute specimens was a major limitation. Future studies should target collection of environmental and food samples, acute specimens, and rigorous assessment of community use of pesticides to determine etiology.