Number of new cases of recent syphilis per year among patients followed for human immunodeficiency virus infection in Martinique according to gender and sexual orientation. This figure appears in color at www.ajtmh.org.

Number of new cases of recent syphilis per year among patients followed for human immunodeficiency virus infection in Martinique according to the professional status. This figure appears in color at www.ajtmh.org. 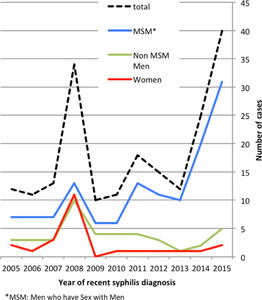 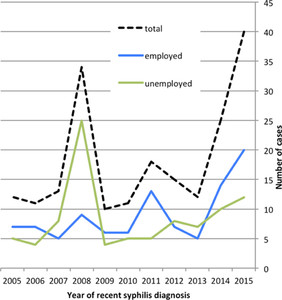 A syphilis outbreak began in Martinique, French Antilles, in 2004, initially among men who had sex with men (MSM) and who were living with human immunodeficiency virus (HIV). The outbreak subsequently affected all groups at risk, leading to a first epidemic peak in 2008. After an initial decrease, the outbreak started growing again in 2014 among patients living with HIV with unprecedented incidence among MSM. Herein, we describe the change in medical and social parameters of the outbreak since 2005.

As in other western countries, a syphilis outbreak began in Martinique, French Antilles, in 2004, and concerned initially men who had sex with men (MSM) and who were living with human immunodeficiency virus (HIV). The outbreak spread rapidly in the other groups at risk, including crack cocaine users and persons leaving in precarious conditions. After an initial decrease in incidence, the outbreak started growing again in 2014 among patients living with HIV (PLHIV) and primarily concerns MSM.

Unpublished data of the French sexually transmitted infections (STIs) surveillance network highlight an increase in STIs, including syphilis, since 2012 among MSM, with a progression of high-risk sexual behavior in this population. In France, one-third of patients with a new diagnosis of recent syphilis were coinfected with HIV. In 2013, the incidence of HIV in Martinique was estimated at 26 per 100,000 person-years; among these persons, 35% were MSM.

All PLHIV followed in the French University Hospital of Martinique between January 1, 2005 and December 31, 2015, with a new diagnosis of recent syphilis (primary, secondary, or early latent syphilis), were included. Both treponemal (Treponema pallidum hemagglutination assay) and nontreponemal tests (Venereal Disease Research Laboratory tests) were performed together at least annually in all PLHIV followed. All positive and discordant results were verified by using fluorescent treponemal antibody absorption. Characteristics of patients with a diagnosis made between January 1, 2005 and June 30, 2010 (first period), were compared with those diagnosed between July 1, 2010 and the December 31, 2015 (second period). Demographic and clinicobiological data were prospectively collected via the standardized electronic medical record Nadis®.1 We determined the medical and social parameters of patients affected by this outbreak, including demographical, immunovirological, socioprofessional data, and declared sexual orientation. Syphilis reinfections were defined as two or more distinct episodes of recent syphilis reported by the patient or the medical records.

Demographic data (number of patients) and incidence of recent syphilis among patients followed for HIV infection in Martinique per year, 2005–2015

The main medical characteristics of patients are presented in Table 2: Age, immunovirological parameters (CD4 count, HIV viral load), and syphilis recurrence rates did not significantly differ between 2008 and 2015.

Main characteristics of patients with recent syphilis among patients followed for HIV infection in Martinique: comparison between the first (2008) and the second (2015) epidemic peak

As shown in Figures 1 and 2, the population affected in the epidemic peaks of 2008 differed from that in 2015.

Socioprofessional status also differed between the two epidemic peaks: 12 patients were unemployed in 2015 (37.5%) versus 25 in 2008 (73.5%) and 93 (46.3%) considering the whole period of the study. Unlike the second peak of 2015, during the first peak, the outbreak affected proportionally more unemployed patients than during the whole period of the study (P = 0.003).

In 2000, a syphilis outbreak started in western countries, including France.2 This outbreak appeared in Martinique in 2004 among MSM living with HIV. Four years later, it shifted to other groups at risk, including heterosexuals, leading to a first epidemic peak in 2008.3 This shift was similar to that reported previously for HIV infection.4

The incidence of recent syphilis among PLHIV in Martinique more than tripled in 2015 compared with 2013. This highlights a clear surge of new cases during the past 2 years. However, the sociodemographic characteristics of infected patients have changed: although almost three-quarters of patients in the first epidemic peak were unemployed and/or had a low educational level, the proportion of patients in these categories was significantly lower in the 2015 peak. This sociodemographic switch may be related to the shift from one group at risk (PLHIV living in precarious conditions, crack-cocaine users, and sex workers) to another (MSM) with a higher mean socioprofessional level. In contrast, MSM were a minority during the 2008 epidemic peak, but the majority in 2015, confirming the upsurge during the two last years. However, these findings, which concern PLHIV, may not be generalizable to other populations affected by the syphilis epidemic and who are not infected with HIV. This outbreak of syphilis among MSM in Martinique is not isolated. Indeed, similar outbreaks have previously been reported throughout the world at different times.5–9 The acquired immunodeficiency syndrome epidemic has resulted in behavioral changes with a decrease in syphilis among MSM in the 90s.10 The current surge of syphilis is consistent with reports of increased high-risk sexual practices among MSM,8 in part related to a decreased perceived risk of HIV transmission, due to highly active antiretroviral therapy11 and preexposure prophylaxis development.12 As already described,13 the increasing use of social media to meet sex partners could also have facilitated the rapid expansion of syphilis among MSM in Martinique. The high incidence of recent syphilis among patients already followed for an HIV infection, especially since 2010, reflects the lack of condom use and the failure of prevention policies in this population. Unfortunately, data on sexual practices were not collected in this study, and we do not know if this new surge is associated with a progression of high-risk sexual behavior. Another limitation to the study is the lack of a multivariate analysis, due to the small number of patients, to control for confounders in the characteristics of the population.

Syphilis is the most common coinfection in newly diagnosed PLHIV in France14 and is associated with more frequent complications among PLHIV.2 As syphilis increases the risk of HIV infection15 and because MSM are at the highest risk of HIV infection,16 the control of this outbreak is a priority. Monitoring syphilis incidence among PLHIV is also an excellent indicator of sexual risk-taking among high-risk populations, including MSM. This study offers the opportunity to establish the sociodemographic shift of this new surge in a relatively isolated population of 400,000 people living in Martinique, and to sound the alarm on sexual risk-taking among the MSM population.

These data reveal a growing outbreak of syphilis since 2014 among PLHIV in Martinique. Contrary to the first epidemic peak of 2008, this new outbreak concerns mainly MSM. A strengthening of targeted preventive policies to prevent high-risk sexual practices is urgently required.