Study sites of the cluster-randomized controlled trial in a cohort of children in two regions of Burkina Faso, February/March 2015 and 1 year later. 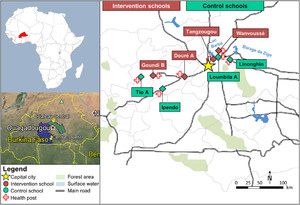 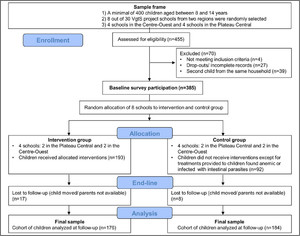 The potential health benefits of combined agricultural, nutrition, water, sanitation, and hygiene (WASH) interventions are poorly understood. We aimed to determine whether complementary school garden, nutrition, and WASH interventions reduce intestinal parasites and improve school children’s nutritional status in two regions of Burkina Faso. A cluster-randomized controlled trial was conducted in the Plateau Central and Center-Ouest regions of Burkina Faso. A total of 360 randomly selected children, aged 8–15 years, had complete baseline and end-line survey data. Mixed regression models were used to assess the impact of the interventions, controlling for baseline characteristics. The prevalence of intestinal parasitic infections decreased both in intervention and control schools, but the decrease was significantly higher in the intervention schools related to the control schools (odds ratio [OR] of the intervention effect = 0.2, 95% confidence interval [CI] = 0.1–0.5). Indices of undernutrition did not decrease at end-line in intervention schools. Safe handwashing practices before eating and the use of latrines at schools were significantly higher in the intervention schools than in the control schools at end-line (OR = 6.9, 95% CI = 1.4–34.4, and OR = 14.9, 95% CI = 1.4–153.9, respectively). Parameters of water quality remained unchanged. A combination of agricultural, nutritional, and WASH-related interventions embedded in the social–ecological systems and delivered through the school platform improved several child health outcomes, including intestinal parasitic infections and some WASH-related behaviors. Sustained interventions with stronger household and community-based components are, however, needed to improve school children’s health in the long-term.