Mean body mass index (BMI) differences between subjects with and without images that suggested clonorchiasis analyzed by Student’s t test. Data are expressed as mean ± SD.

Mean age differences between subjects with and without images that suggested clonorchiasis analyzed by Student’s t test. Data are expressed as mean ± SD.

Mean eosinophil count differences between subjects with and without images that suggested clonorchiasis analyzed by Student’s t test or *Kruskal–Wallis test. Data are expressed as mean ± SD. 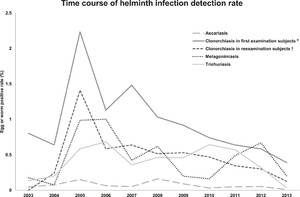 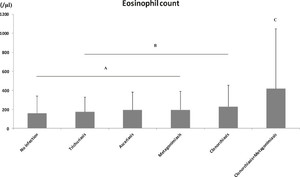 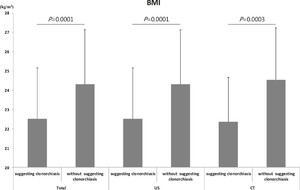 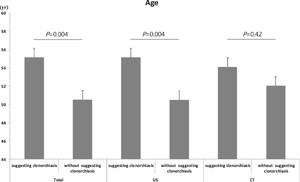 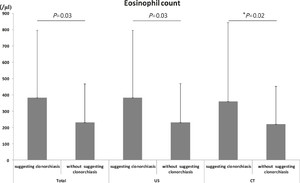 We conducted this study to explore the extent of occult helminth infection identified by fecal parasitological examinations or organ-specific examinations such as colonoscopy and abdominal ultrasonography (US) during health checkups. We analyzed 197,422 fecal samples from 99,451 subjects who received health checkups at a single center over 10 years. We found that 3,472 (1.8%) samples from 3,342 (3.4%) subjects tested positive for parasitic ova, including clonorchiasis, metagonimiasis, trichuriasis, ascariasis, trichostrongylosis, taeniasis, and enterobiasis. The detection rate for clonorchiasis was higher in those who were taking their first examination than in those who had been examined previously. The detection rate for clonorchiasis decreased gradually over the 10 years. Only 2.5% of the patients with clonorchiasis showed US or computed tomography (CT) images that were compatible with the disease. Clonorchiasis patients who had abdominal US or CT images that suggested clonorchiasis were older and had lower body mass indices and higher eosinophil counts than did those whose US or CT images did not suggest the disease. We observed worms in 9% of the patients with trichuriasis who had received a colonoscopy. Colonoscopy also uncovered adult worms in 0.03% of subjects who were not identified as having Trichuris trichiura ova in their fecal helminth examinations. In summary, our study shows that occult helminth infection is fairly frequently identified by a variety of methods during health checkups, which suggests that doctors need to make greater effort to identify and treat occult helminth infections in Korea.

Parasitic infection is an important public health issue with different clinical significance according to each country’s public health status.1 These infections are also an important clinical problem in Korea; clonorchiasis has been the most common helminth infection, although the overall helminth infection prevalence is low.2 Clonorchiasis detection is important because the parasite usually has no symptoms but it is a biocarcinogen for cholangiocarcinoma, which suggests that detecting it may contribute not only to enhancing general public health but also to preventing cholangiocarcinoma.3–5 However, data regarding specific parasitic screening recommendations, even for the carcinogenic clonorchiasis, are limited.

Health checkups provide a good opportunity to detect silent enteral parasitic infections because fecal examinations are routinely included and performed as an official screening method to detect colon cancer in Korea and other countries.6,7 Fecal examinations are simple, noninvasive, and effective for detecting enteral parasites and fecal occult blood during health checkups,5,8 and the screening is unlikely to bother patients because one fecal sample can be used to detect parasitic ova and occult blood simultaneously.

Abdominal ultrasonography (US) and colonoscopy are widely performed during liver and colon cancer screening, and these organ-specific examinations may also contribute to detecting enteral parasitic infection.9,10 Clonorchiasis is reported to cause specific abdominal US or computed tomography (CT) findings of diffuse dilatation of the peripheral intrahepatic bile ducts without dilation of the larger bile ducts in the liver.11–13 However, data about the performance of these images in detecting clonorchiasis are limited.14 Adult worms may be detected during colonoscopy in trichuriasis patients.9 However, we could find no data about actual detection rates for adult worms by colonoscopy among patients with trichuriasis.

We performed this study to explore two questions1: What is the magnitude of occult helminth infection identified by fecal parasitological examinations during health checkups? and2 By which organ-specific examinations (abdominal US, CT, colonoscopy) are enteral parasites detected?

Between October 2003 and October 2013, 99,451 patients (53,284 males and 46,167 females) received a fecal examination during their health checkups at the Seoul National University Hospital Healthcare System Gangnam Center in Seoul, Korea. Our subjects had high socioeconomic status such as high ranking post in companies or organizations in Korea and many of them lived in urban areas. We collected a total of 197,422 fecal samples from these patients and analyzed them for the presence of parasitic ova.

Each patient answered a questionnaire, underwent anthropometric assessment, and had laboratory tests and a radiologic study (abdominal US or CT) on the same day as the checkup. From the questionnaires, we collected data about age, gender, and residing area. Abdominal US was performed on everyone to evaluate liver, gall bladder, bile duct, pancreas, kidney, and spleen. Abdominal CT was performed in those whose abdominal US revealed any abnormal findings, which needed further evaluation by CT or whose sonic window was poor for evaluating intraabdominal organs adequately. Colonoscopy was performed on everyone above age 50, and on those who were fecal occult blood positive or had family history of colon cancer in their first-degree relatives even though their age was below 50. We calculated body mass index (BMI) by dividing the weight in kilograms by the square of the height in meters; the laboratory tests included white blood cell count and percentage of eosinophils. We collected blood samples from each patient before 10 am after an overnight fast. We performed all biochemical analyses of the blood samples in the same quality-controlled laboratory according to standard laboratory methods. We calculated eosinophil count by multiplying the white blood cell count by the percentage of eosinophils, and we defined eosinophilia as > 500 eosinophils/uL.15 Radiologists assessed all US and CT scans and considered images with uniformly and diffusely dilated peripheral intrahepatic bile ducts without dilatation of the large bile ducts and focal obstructing lesion to be compatible with clonorchiasis.12 Colonoscopy was performed by board-certified gastroenterologists from the Seoul National University Hospital Healthcare System Gangnam Center.

Plastic containers were distributed with printed instructions for the procedure for fecal sample collection 7 days before the health examination date; the patients collected the samples early on the mornings of their examinations and submitted them on the same day. We examined the samples for parasite ova by the cellophane thick smear technique (the Kato-Katz method).8

The data are expressed as mean ± SD. We explored intergroup differences in the continuous variables using Student’s t test, the Kruskal–Wallis test, or analysis of variance. We checked for intergroup differences in the frequency variables using the χ2 test and checked the significance of trend changes over time using the Cochran–Armitage trend test. We used SAS 9.2 version (SAS Institute, Cary, NC) for the statistical analyses and considered a two-tailed P value less than 0.05 to be statistically significant.

The study protocol was approved by the institutional review board of Seoul National University Hospital (IRB No. H-1508-113-696). The board waived informed consent because this was a retrospective study that did not harm any study subjects.

Trichuriasis was detected by fecal examination in 831 subjects and by colonoscopy in 11 subjects.

91 patients were positive for the same ova more than two times in their fecal helminth examinations: 54 had clonorchiasis, 11 had metagonimiasis, 24 had trichuriasis, and two had ascariasis.

Annual changes in the detection rate for each parasite.

Low detection rate for clonorchiasis by abdominal US or CT.

Only 0.3% of subjects had clonorchiasis-compatible images among 93,755 subjects who received US but who tested negative for clonorchiasis in their fecal helminth examinations (Table 3).

Knowledge about the infection source is important for eradicating helminth infection, especially under circumstances such as those in Korea where occult helminth infections are frequently detected; we found 91 patients who had tested positive more than twice for the same ova during their fecal helminth examinations. The two most common helminth infections in our data were clonorchiasis and metagonimiasis, and the most common coinfection was also by clonorchiasis and metagonimiasis. These results are because both clonorchiasis and metagonimiasis are trematodes, which are transmitted through freshwater fish.21 Thus, educating patients with clonorchiasis not to eat raw freshwater fish is very important for preventing reinfection by both clonorchiasis and metagonimiasis. A recent study from Korea reported that the prevalence of clonorchiasis along five major rivers in Korea was as high as 8.4%, higher than the rates we found in this study or the findings from other studies, which suggests that educating people not to eat raw fish may be particularly necessary and more effective in areas where clonorchiasis is endemic.22 Trichuriasis and ascariasis were the next-most common helminth infections in our data. Both of these are soil-transmitted helminth infections that are transmitted by ingesting eggs in contaminated vegetables or from unwashed hands after handling contaminated soils, and therefore food, personal hygiene, and sanitation are important for preventing these infections.23,24 It is considered that soil-transmitted helminth infections have nearly disappeared in Korea.25 However, in our data, the egg-positive rates of trichuriasis and ascariasis were 0.8% and 0.1%, respectively. These rates are slightly higher than those from the seventh national survey of the prevalence of intestinal parasitic infections performed in 2004 (0.3% and 0.05%, respectively).2 These data were embarrassing because our study populations had relatively high socioeconomic status and good sanitation. We assumed three possible reasons for our results: first, more frequent business or leisure travel to areas where soil-transmitted helminth infections are endemic; second, ingesting helminth eggs by eating foods grown in egg-contaminated soil or grown using human feces as a fertilizer; and third, ingesting helminth eggs because hands were not washed after a person handled egg-contaminated soil. One clue to these assumptions was that patients with trichuriasis who lived in a foreign country were concentrated in Malaysia and Indonesia, which coincides with the fact that trichuriasis has been the most common enteral parasitic infection in these countries.1 Education about hand washing and eating cleanly prepared foods may be necessary for subjects who travel frequently to or live in areas where soil-transmitted helminth infections are endemic.

Our study has the potential limitations related to retrograde studies, although the complete medical records might have helped to overcome them. There are also limits to generalizing our study results to the Korean population because our patients had high socioeconomic status and many of them lived in urban areas. However, large numbers of subjects may help to overcome this limitation.

In conclusion, our data showed that occult parasite infection is fairly frequently detected by a wide variety of methods during health checkups, which suggests that doctors need to make more efforts to identify and treat occult helminth infections in Korea.